Ok, need to break from monsters for at least a day or two, so here’s a design distraction.

Ok, this is a design I’ve been working on. A conversation on G+ with William Nichols reminded me that I really need to get this down on paper. This has some obvious ancestors (The -World system – World of Dungeons in particular – and Fate) but also some obscure ones (most notably, a superhero game called Above the Earth. After the fact, I realized there’s a little bit of backwards Wushu in there too, which is a bit of unintentional humor). Basically, I don’t pretend to having an original thought anywhere in this, but that’s fine. Anyway, I’m calling it 729 for the moment, at least until it’s done.

I’ll do a fancier writeup later, but for now, let me lay down the bare bones. Core resolution is single roll apocalypse engine – roll 2d6, on a 6- it goes poorly, on a 10+ it goes well, and on a 7–9, the result is mixed. Obviously there will be guidelines and examples and such, but that’s the core. For the moment, assume there will be no moves per se. That might change with time, but for simplicity, there is only a roll, initiated by a question (usually “Can I…” or “What is…”).

The system also assumes the existence of bonus dice. That is, sometimes you might be rolling 3d6, 4d6 or even more. However many dice you roll, you keep the best two (though there may be exceptions later, but we’ll get to that). As an important corollary to that, there are no bonuses, so you’ll never be adding anything.

Your character “sheet” is just some true stuff about your character. This is pretty open ended – it might be a description, an aspect list, a class, or whatever. Largely depends on audience. One way or another, this is what is true about your character. When it’s relevant to a roll, you can describe its interaction with the roll, and grab a free bonus die. So if you’re a “ninja” and you do something sneaky, you describe that you do it “like a ninja” and get to roll 3d6 and call it a day.[1] The exact details of the descriptors don’t matter a lot, and this is intentional. That said, it completely works with Tinyfate.

With this, you are almost ready to start play. When play begins, each player grabs 10d6 (either the white ones you get in bulk, or use one of those chessex pools). This is their “effort” pool, and whether it represents willpower, luck, determination, divine will, experience, opportunity or narrative power is an intentionally unanswered question, especially as the answer may change from situation to situation. 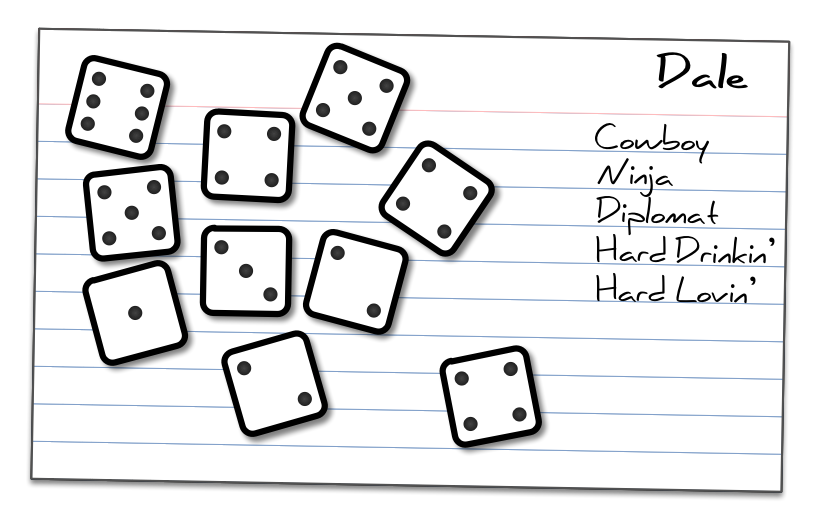 In play, a character can spend dice from the effort pool to improve a roll. Dice spent in this way are lost. Physically toss them back into the reserve bowl that they came out of. But if a roll matters, then spend some effort on it. Best practice is that the use of effort must be tied into the fiction, but the reality is that this is loose – the only real bar is that they not simply be spend without comment. Something in play must reflect the effort[2].

Effort pool refreshes at the start of the session, or at a reasonable break point. GM may also give effort rewards according to whatever criteria she likes[3], or may offer it to players in return for making certain choices or accepting GM forces.

Now, this is an OK design. I could write it up into a nice pdf and it would see some use, but I wouldn’t be happy with it, because it has two serious flaws.

The effort economy question is an interesting one. Accepting that it’s currently kind of arbitrary based on the GM, it’s functional, but very clunky. The question is what problem needs to be solved. I could easily come up with rules for GM reserve of dice, used to drive effects, and a whole economic cycle where dice go from players into the reserve, from he reserve to the GM, from the GM to players and so on. But any such system is going to complicate the system, perhaps unreasonably so. it is very easy for the economy to become such a fiddly mini game that it distracts from the game as a whole.

Which is why, for the moment, I’m sticking with clunky but functional. If the rest of the system was tuned, then I might see what I could do, but it would be super foolish to delve too far into it without addressing the other issue.

Conflict is a much more cumbersome issue. Now, arguably, this is also a problem that need not be resolved – it is totally possible to just say combat resolves just like everything else. Tune the granularity as you like – one roll per fight scene, one per clash of blades or somewhere in between. That works in the most technical sense, but I worry it could be flat in play.

Is that a problem? Well, what is the game? If conflicts are common, then it’s probably an issue. If they’re not? No bigger.

But that leads to the next question: What’s a conflict? I’ve been using the term interchangeable with combat, but that’s only because combat is the most obvious example of a conflict. But to consider how muddled the language is, look at the discussion of “social combat” in RPGs – it’s not combat, but the tools of combat get used for these conflicts because they’re what we have.

So I use the term conflict to abstract out the idea into a few identifiable bits, specifically these two things:
1. A situation which cannot be satisfactorily resolved in a single roll
2. An action where there are costs associated with outcomes.

There are other things which might make up a conflict[4], but these two are the two I always come back to.

The first one is a familiar bugbear, and it’s pat of the reason that wound systems were invented in the first place. While they may be refined in the details, at their heart, they still boiled down to “you may fail X times before actually failing” because failing after the first roll would be unfun.

And that is where the second one pops up. The most obvious cost associated with a conflict is “damage”. As noted above, within a single conflict, that is just a timer on how many die rolls it takes to resolve something. But the cost element means that that there is a measurable impact of winning with 5 good rolls and zero bad ones versus winning with 5 good rolls and 4 bad ones. The second fight would play differently, but it would also cost resources (damages) so that the character has fewer resources in the next conflict.

This is, I should add, why combat is so appealing as a model . It has the same currency (supplemented by things like poison and injury), something that is hard to translate over to other conflicts. It can be mimicked with fatigue or mental stress, but that is not always an intuitive match – the fact that we lost one argument on the internet rarely makes us any less capable of engaging in the next one (with some exceptions). This is one of the brilliant things about Mouseguard’s stats-based injury system, extended and explored further in to Torchbearer. By making multiple currencies, it becomes much more organic to translate them between different scenarios, and by making them effectively binary (you’re tired or you’re not), the logic of their applicability becomes obvious. This is good tech.

I look at all this and it suggests to me that if I want to add a system for conflicts, then I need a system for consequences. Simplest answer is to have effort stand in for damage, and that flags why I didn’t want to mess with the economy until I’d looked at conflict. It also worries me a little bit, since draining the effort pool seems like a good way to drain fun.

Thankfully, there are plenty of other possible mechanics to look into for handling this. I have not even touched the possibility of penalty or locked dice yet, and that just scratches the surface.

Anyway, I lay all this out now so that when I start talking about refining it in the future, you have the starting point.