The Marvel Heroic Roleplaying Game rolled out today. It’s awesome, simple as that, but I wanted to take a moment to throw up my own version of the credits page.

That said, if you’re on this, and want your descriptor changed, add a comment, and it will happen! 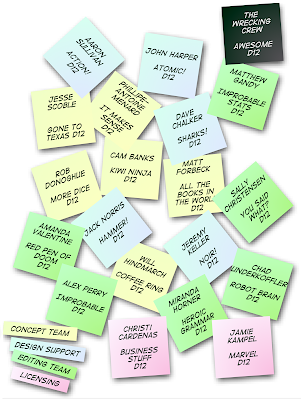 Curiosity was expressed regarding how I come up with stuff, so here are a few pages from the notebook I’m thinking in, representing a few thoughtful days.. 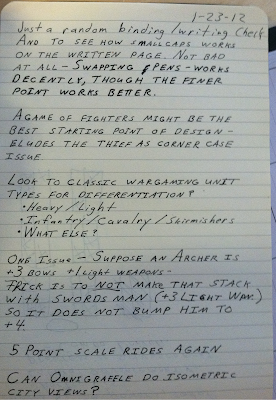 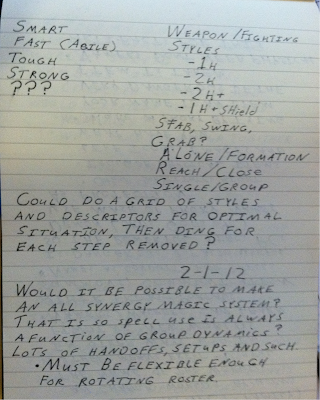 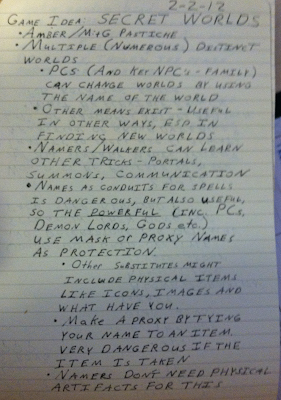 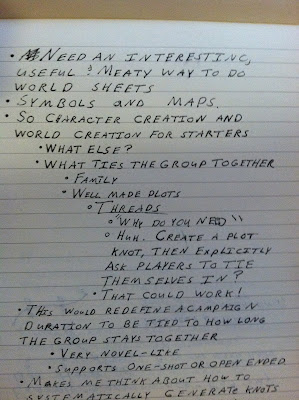 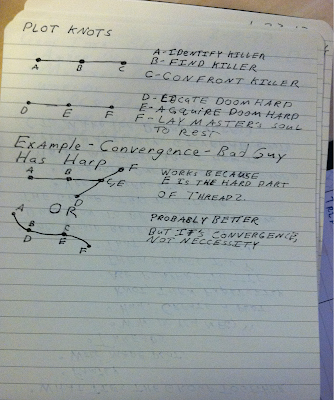 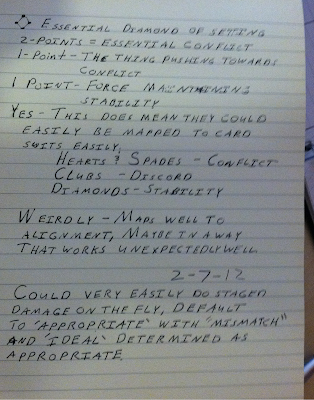 Not sure I buy into this, but a mention on twitter of WOTC’s 3 pillers of RPG (Exploration, Roleplaying and Combat) popped it into my mind. (EDIT: Dave rightly points out that Wizards views these as the three pillars of D&D, a subtle but important distinction) 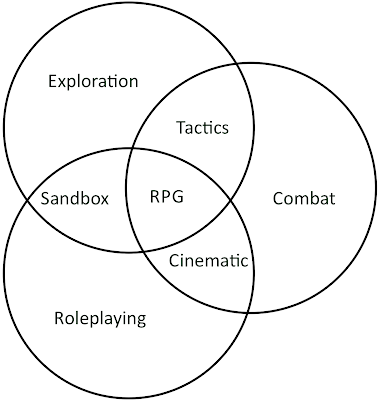 For a friend’s birthday this weekend, a request was made for a game to be run, and given a combination of short notice and assessment of the taste of all players involved, I ran Two Guys With Swords.
2GwS has a somewhat fantastic self-selection process. It is run (at least by me) with a certain tone that combines high action with no small amount of tongue in cheek. Thankfully, the random tables do a fantastic job of conveying the tone of the game – if you see the tables and they make you smile, then it’s probably the right game for you.
Anyway, this was interesting since it was a full table, and we ended up playing Five Guys with Swords (insert obligatory hamburger joke here), which required a little tweaking of things. There were also a few decisions made on the fly that might be useful for folks looking to do interesting things with C+, so I figure I’ll run through them.
First, the big change for chargen was to allow every player to write something down on everyone else’s sheet, so it went something like this – write a distinction, pass the sheet left, write another distinction, pass the sheet left, and keep repeating this until there were 5 distinctions on the sheet. It worked startlingly well, and because distinctions are entirely subject to player interpretation, it was less inhibiting than doing the same thing with aspects might have been. it also gave everyone a little bit more of an investment in everyone else’s character, which was a good way to establish quick cameraderie.
Second: Magic rules. So, 2GwS technically includes magic, but it’s totally the magic in the same way that Gray Mouser technically knew some magic. That is to say, badly – often to the point of disaster. When a player uses a gonzo distinction for a gonzo effect, they roll both the d8 and the d4 (and do not get a plot point) but in return there’s a lot more narrative leeway in the outcome (and I am also more shameless in my willingness to explicitly pull out crazy-ass consequences as a result).
Third: Multi-sided conflicts. At one point in the first fight, one of the players started a small avalanche (d8) which I shamelessly spent complications on to turn into a d12 + d8, and it became a third side in the fights. Mechanically, this proved staggeringly easy to adjudicate, at leas tin part because the avalanche wasn’t doing anything terribly complicated: if it wins, it puts a “Buried” complication on the opponent, and it was an equal-opportunity threat (one fight ended with both sides getting whomped by the Avalanche and taken out of the fight)
Fourth: Fixed and transient play elements. It totally helps to have 2 colors of post-its, so transient declarations are a different color. Makes table management much easier. Similarly handy – I’ve been experimenting with all-caps handwriting lately, and while I’m still undecided on it, it _absolutely_ helps with the post-its.
So, given those rule hacks, the thing I found I need to add are a few more tools for the GM for handling his threat budget and drawing inspiration in a manner similar to the generation tables. In the absence of that, I was very ad hoc in my threat numbers. I think it would probably be easy to standardize it, and I have at least one good idea for a hack (turning any cleaned up elements into complications). All of which is to say, I suspect I may have to do a proper 2GwS writeup, including some explanation of what actually happens at the table for those who don’t quite get some of the statements I’m making about the game.

So, with this discussion of weapon damage type, a pretty basic question gets raised – how do we support the cool parts?

Ok, so if you’re not going to do damage types (or even more complicated things like weapon versus armor type tables) then how should you go about meaningful weapon differentiation?

Well, first off, why would you want to? Isn’t that a pretty finicky idea?
Yes, it kind of is. And it’s entirely possible (and reasonable) even, to create game with no weapon differentiation, or with nothing more complicated than light, medium and heavy weapons. This totally works, and it allows for dramatic differences in color without slowing down the mechanics. You have a longsword and I have a mace and he has a katana and she has something from a Star trek episode that only she can pronounce, but we all just roll 1d8 for damage, so it all works out.
But sometimes people like differentiation to have teeth. Sometimes it’s a sense of ‘realism’ but more often it just the general desire to have system reinforce and support our choices.
If you’re going to do that, you need to make sure that the difference between weapons exist on more than one axis. Now, damage will almost always be one axis, but the other might be speed, accuracy or something else. As an example, one of the baseline weapon choices you can make in 4e is whether you want a weapon that’s +2 to hit and 1d10 damage or +3 to hit and 1d8 damage. Deep math nerds can tell you a lot of details about that tradeoff, but to jo reader, that seems about right.
Two axes (axis, plural, not the chopping thing) helps, but it still produces a pretty straightforward curve of tradeoffs that gets easy to calculate on. The obvious solution is to add more axes – speed and penetration and, yes, even damage type. Provide enough differentiators and choices become inobvious, which is desirable.
But that is, frankly, a pain in the ass. It makes weapon stat blocks complicated and unreadable, and virtually guarantees that some number cruncher will find some specific weapon that is just unbalancingly badass if used just so. The rewards of complexity are quickly bogged down by the drawbacks.
A good compromise is to use an exception-based system. That is to say, some weapons may have keywords which grant them special rules. Now, this may seem fancy pants, but this idea has existed for as long as there have been bastard swords. The introduction of a special rule (you can use it in one OR two hands!) made the weapon interesting and appealing in a way that was difficult to precisely measure against. You can add these special rules individually (as was the case with the bastard sword) but it’s often easier to come up with a set of keywords for frequently occurring effects.
The joy of this method is that because these are exceptions, they don’t introduce any more than the bare minimum of necessary complexity. Now, yes, this can spin out of hand – it would be easy to conceive of a system where EVERY weapon has multiple keywords (the longsword is “Versatile, Stabbing, Slashing” while the dagger is “Stabbing, slashing, nimble, concealable”) but at that point you’re just recreating the axes problem all over again.
Now, if that complexity is what you want, then totally go for it. My aversion to it is at least partially a taste thing (albeit a taste thing that the larger part of the market seems to bear out). But otherwise, look at creating simple differentiation with 2 axes, then layer just enough keywords on top to spice up the mix.
At least that’s how I’d do it.

There’s an interesting question over at Rob Schwalb’s D&D blog about whether weapon damage should be typed. In practice this would mean that weapons might do, say, “slashing” “bludgeoning” and “piercing” damage, and implicitly removing entirely the idea of “untyped” damage from the system.

This is, on the surface, a kind of compelling idea (and fans of GURPS and some other games are going “Well, DUH!”). It adds another dimension to weapon selection so characters stop gravitating to the same sets of weapons. Heck, it could even inspire play: when your fighter is faces with an oozy opponent who ignores his slashing attack, he might be forced to grab an improvised weapon to finish the fight. That’s cool, dramatic and thematic! A total win!
Except…
The reality is that the fighter is just going to carry around 3 weapons, one of each type.[1] The opportunity cost of doing so is fairly low (encumbrance? for a fighter? I laugh!) and the payoff is high enough to allow it. Or if the payoff isn’t high enough, then it hardly matters, does it?
This is one of those unfortunate design traps that I like to call Golf Bag Tactics. The idea actually has its roots in D&D, back in earlier editions when the vulnerabilities of different creatures were sufficiently wide and varied that a common solution was to carry an array of weapons. Even if you didn’t count magic items, a well equipped fighter had his normal sword, a backup sword, a silver sword, a cold iron sword and a non-metal sword, and that was just for starters. It meant the fighter could choose just the right weapon for the fight, which theoretically felt clever and tactical. Unfortunately, all it really felt like was a golf bag full of swords. That idea of the vulnerabilities as drivers of RP and excitement existed, but never really materialized in the face of this.[2]
All of which is to say, be careful of anything that looks like it adds interesting tactics and decisions during a fight which can be trivially short-circuited by choices outside of the fight. Otherwise, you might be one left holding the bag.
1 – Or he might carry some multi-purpose weapons, like an axe with a backspike. How the system handles mixed damage – like blunted edges or stabbing vs slashing with a sword – invites many options.
2 – Part of this was also the fault of a TERRIBLE understanding of the role of dramatic weaknesses in adventure design.