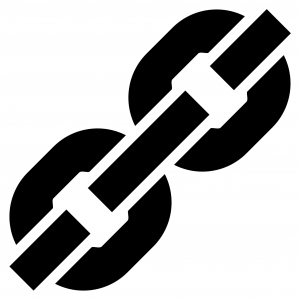 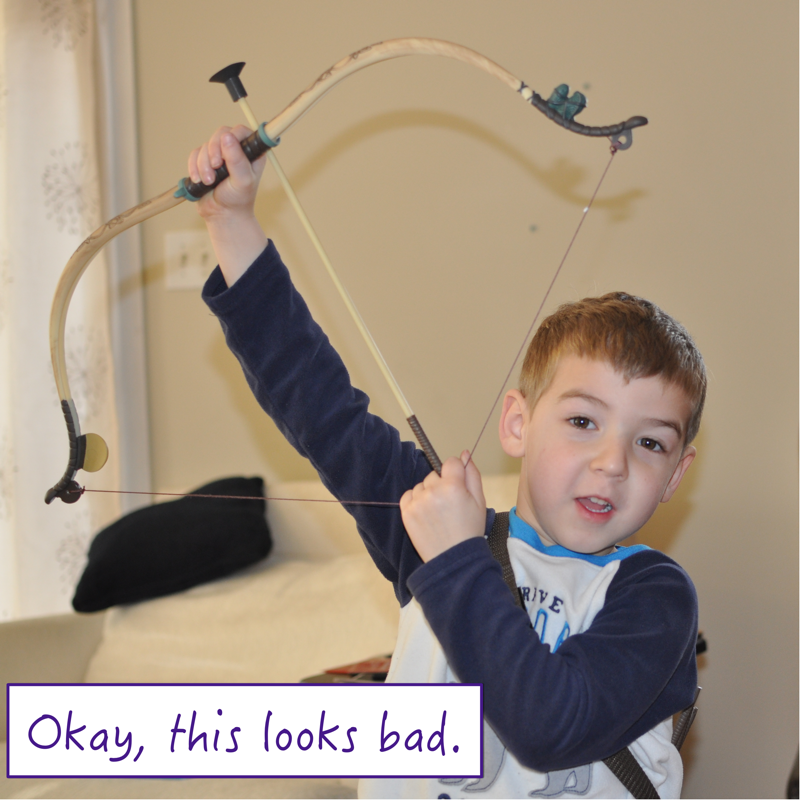 Just a quick first swing at an idea from here. 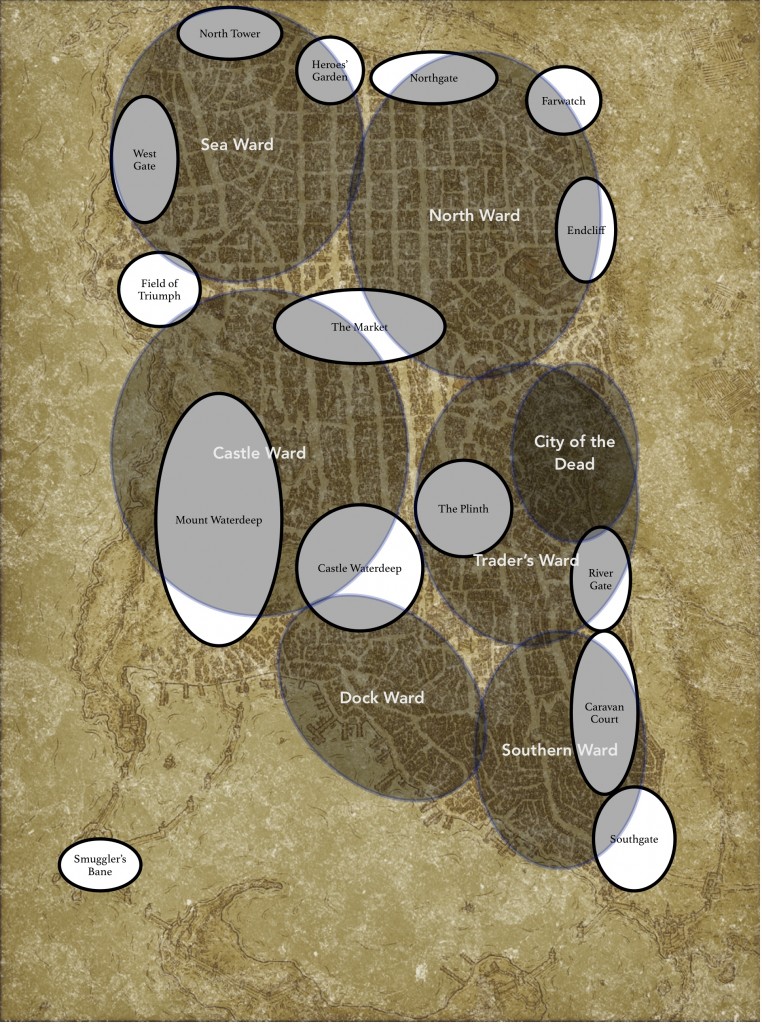 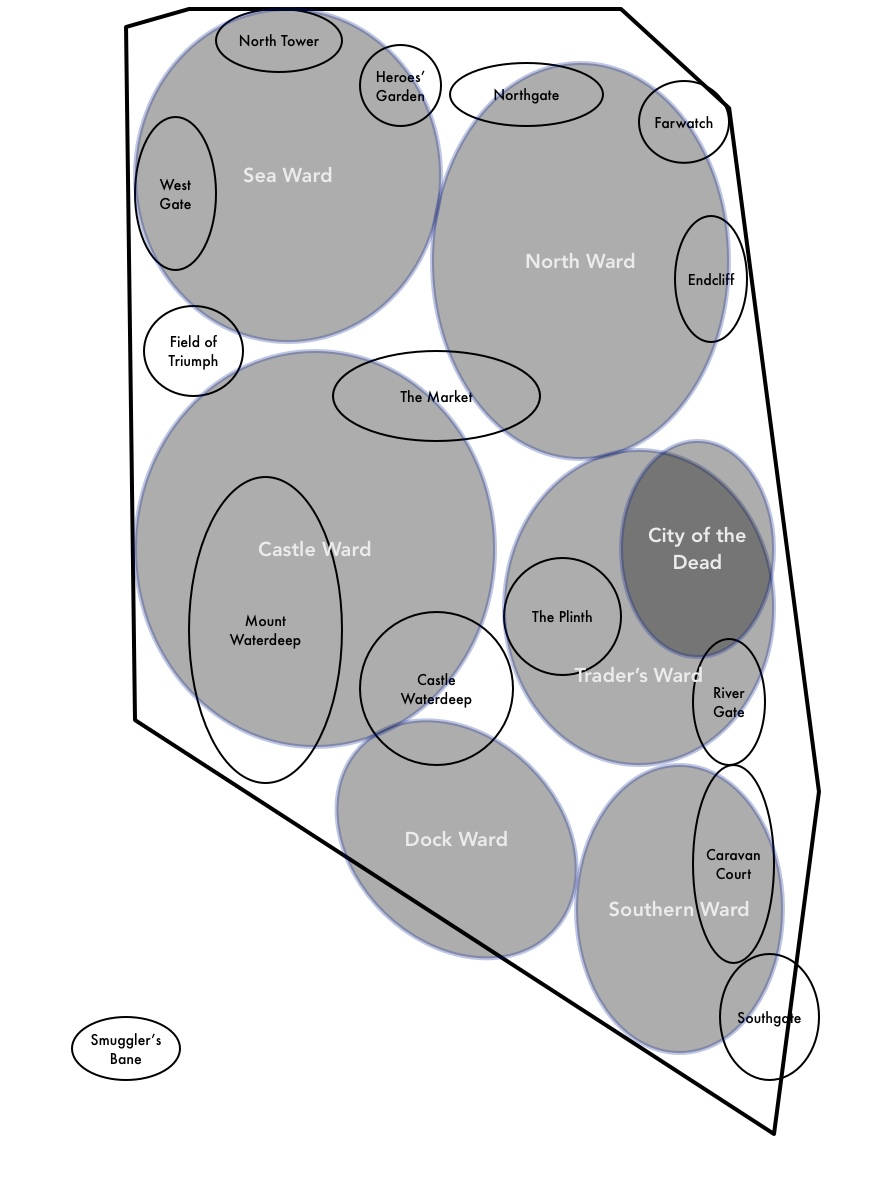 Ugly (Because I have no talent), but weirdly, I could totally see working with that in play.  Huh.

So, here’s another FAE hack that I’m calling “Lords of Intrigue”. This is a bit of a stunt, and if you spot the gimmick, then it will be pretty obvious, but if you don’t, fear not, I’ll explain at the end[1].

Another FAE hack. This one does not have a cunning name yet. The Fate Freeport Companion can be a bit of a help in this one.

Rather than the usual approaches, characters have the following 5 Approaches:

These are not fairly distributed approaches. The simple reality is that Arcane and Pious are less useful than the other three. This is intentional – Arcane & Pious are the gateway to magical abilities, which broaden them significantly.

Players distribute the following array of bonuses: +3, +2, +2. +1, +0 among the 5 approaches. They also select aspects as normal – the Freeport guidelines may be useful in this regard as the expectation is that aspects will be along lines familiar to any D&D player.

Stunts are allocated based on approaches. You may take 2 stunts from under your +3 approach and 1 from one of your +2 approaches.

For Pious and Arcane stunts, look to Freeport (or some other magic system of your choice).

Violent and Sneaky stunts are (hopefully) fairly self explanatory.

Commercial stunts work a bit differently – each stunt represents a resource. The resource may either be something permanent (like an ally, a holding or a title) in which case the character gains a bonus aspect to reflect that. Alternately, it may simply take the form of liquid assets, and may be tapped for a +2 once per session any time money may lubricate matters (and like money, this bonus can stack).

The expectation is that characters are agents of a mysterious patron in a fantasy city. They will have some descriptive goal, like, say “Eliminate the Undead Coven” but they will also have a mechanical element of challenge to them.

That challenge will be rated in five different ways: Priests, Mages, Warriors, Thieves and Resources (and, yes, they correspond with the approaches), which are referred to as opposition. So, for example our undead coven quest might have a rating of 2 priests, 2 warriors and 1 Thief. That might be expressed as

Those values are used by the GM to create a story for that quest as well as to set some mechanical thresholds. Each opposition represents one aspect (usually, but not always a person) and a +1 to the baseline difficulty. So, in our example, matters of religion and violence have a default difficulty of 2, and sneaky stuff has a +1, and it might have the following aspects:

I don’t know about you, but once I’ve laid out those aspects, I’ve got most of what I need to make this a mission.

The problem is, of course, that these things never go in a straight line. I have all the elements in place for the adventure, but I don’t want to just point the players at it. How do I handle the investigation element?

The city gives me what I need, or more specifically, the locations in the city do. City Locations are treated similarly to quests, though rather than having a opposition, they merely have occupants, which are rated in the same fashion. For example, an arena where gladiators duel might have two Warrior occupants, and be noted as

As with quests, those turn into two fighting related aspects, such as:

When players go an engage one of these places, then you connect two aspects of the same type to give the players a clue. For example: a conversatiosn with Olivia (W) might reveal that she saw a Gladiator get killed and get up again (The grave cannot Hold us) and she can tell the players where to find out more.

In this case, for example, suppose the players visited

The House of the Sun(P)

Then they should be pretty close – maybe close enough that good skill rolls and clever play might get them there. If not, then

Should push things over the top. There is no obligation to make players go through all the hoops, rather, as they go through more hoops, you should be making things more and more obvious.

Also bear in mind that players will hit occasional dead ends. If they had cone to The Magical Academy(W) or The Grand Bazaar(RRRR) then it might have been a fun scene[2]but it would not get them any closer to the Undead coven.

Anyway, this is still rough around the edges, but I think it’s a fun start.

Because there was some demand, I present the immensely bloated Advanced TinyFate, with double the pagecount of TInyFate! 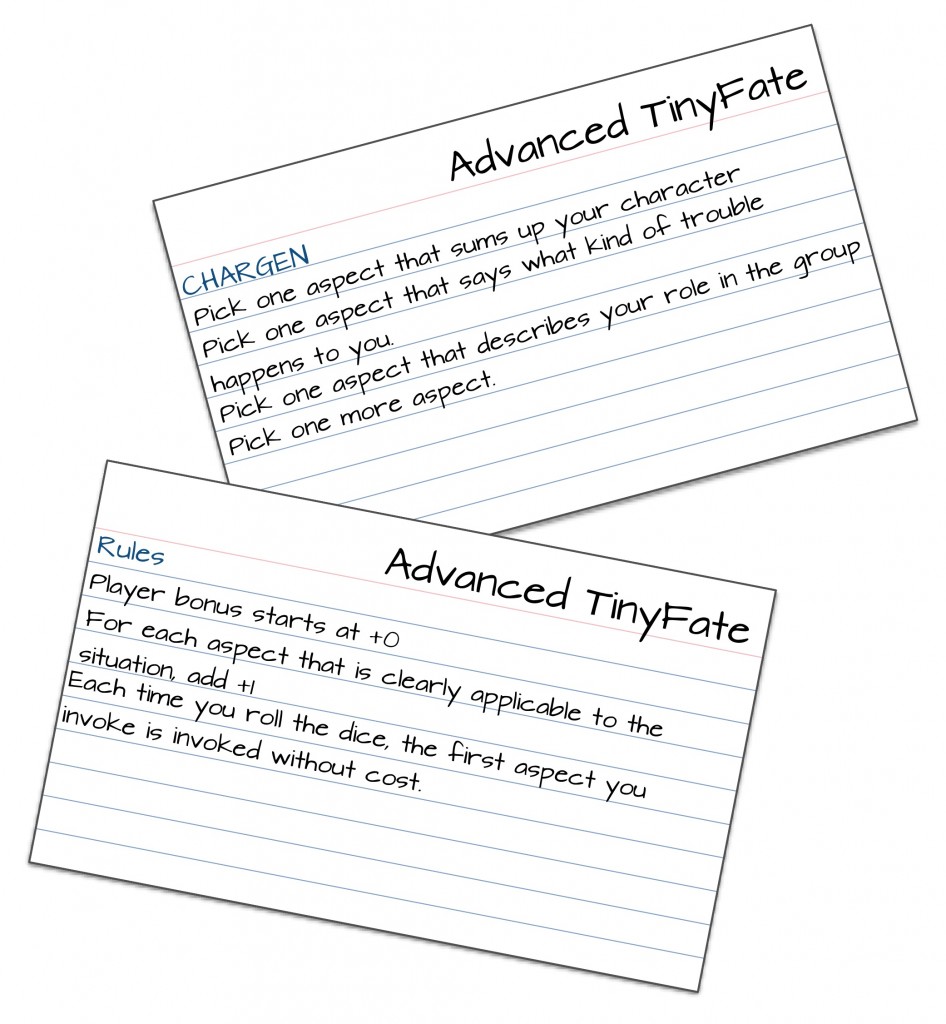 For the nerds, this basically just takes Bruce Baugh’s suggestion and combines it with the “Aspect Only” rules from the fate toolkit where aspects provide a constant passive +1 bonus when they’re applicable.   This is definitely “advanced” because applicability is something that depends on familiarity with Fate, but it’s still pretty simple.

Importantly, this also brings total bonuses back in line with default FAE (offsetting the loss of stunts) which may be useful for some. 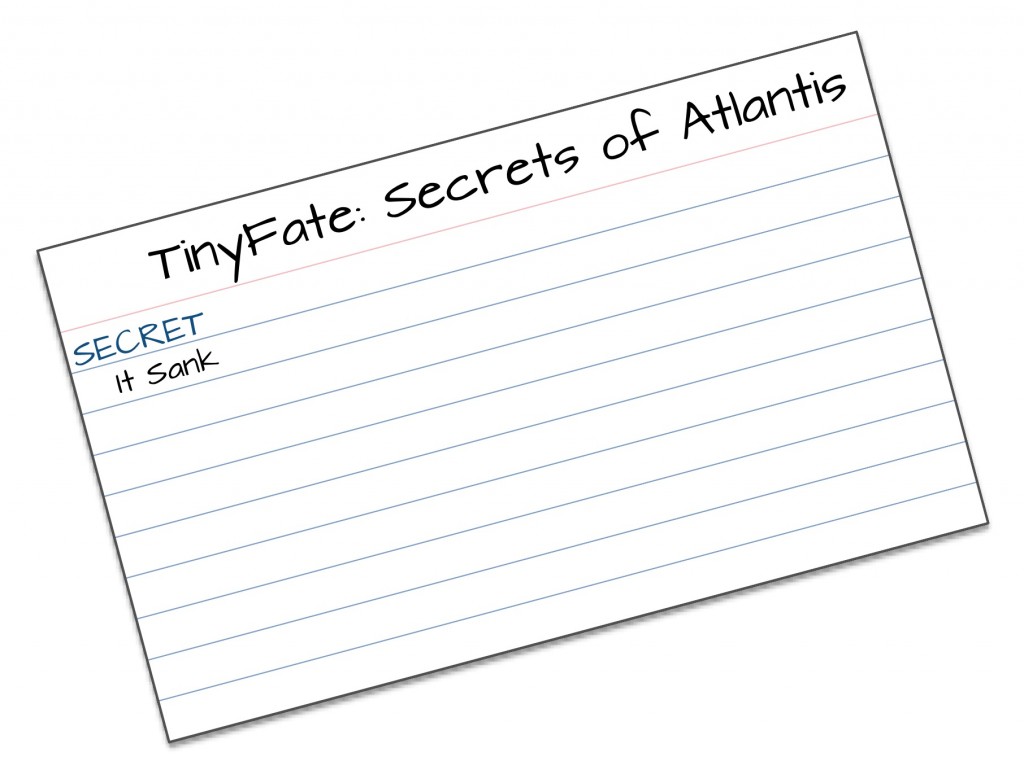 So, I saw these and immediately thought they looked like character sheets. 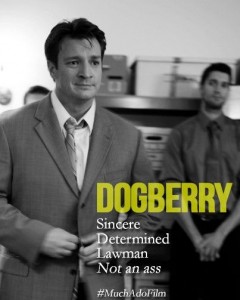 As written, you could probably do them up in FAE in short order, but it would require adding in approaches and stunts, and I admit that would lose a bit of the elegance of it. What it really required was an aspects-only hack.

Conveniently, I had just been thinking about how to really make character differentiation work in FAE (see Classes, for an example) and I had been thinking that one way to do that was to let the core aspect be invoked for free as a way of driving it home (effectively, making it an approach with a value of +2).  And that got me thinking that maybe you could get more mileage if you *didn’t* lock in the free invoke.

And that, in turn, lead to the tiniest Fate/Fae hack of them all – TinyFate 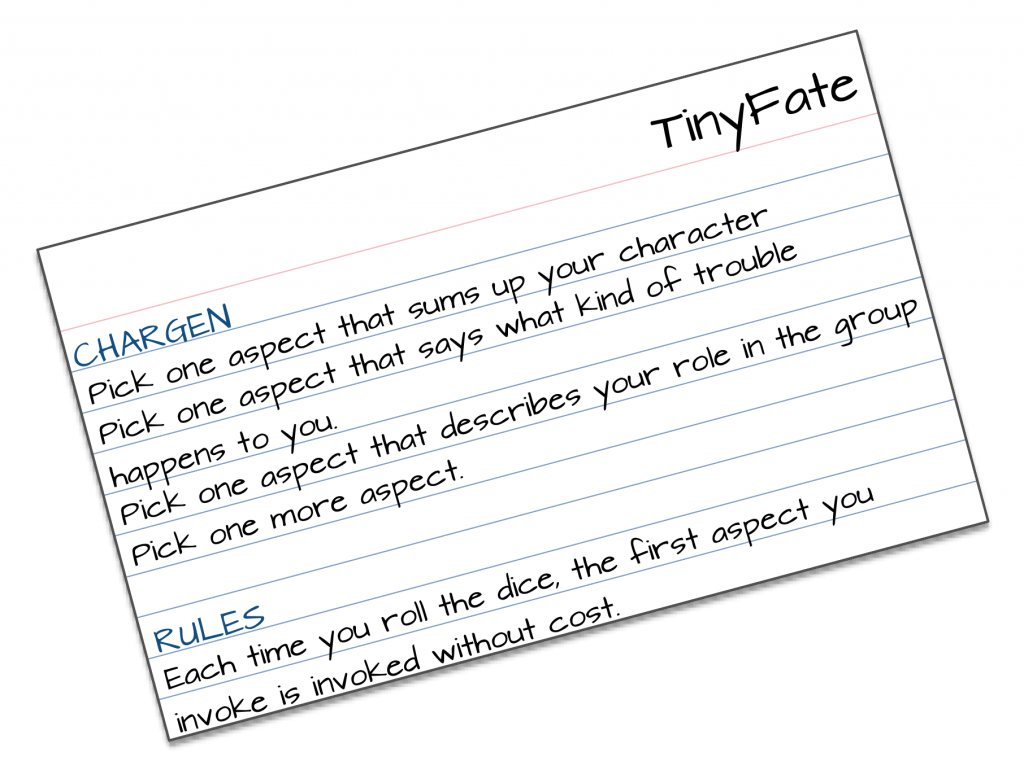 A couple of resources that came up in conversations on twitter

These are three different methods to create a compelling and engaging adventure with little prep and – importantly – without having a pre-written adventure on hand. I love this kind of stuff, and I think it’s directly and practically useful at the table.

It’s also on my mind because I’ve been thinking a bit about what a published adventure for a FAE game would look like. To understand why this is such an interesting challenge, consider converting any classic D&D module or module series[1] to FAE. It reduces the bulk of the dungeon rooms drastically and pulls out the blatant GM forces, laying bare the bones of the actual adventure. Some hold up, others do not.

Now, there’s a case to be made that a good FAE adventure could be little more than the expression of one of those templates I listed above. I think that could work, certainly. It’s all that’s needed in the strictest sense. But I feel like that’s missing something. There were elements of fiction to classic adventures which made them compelling – often more compelling than the actual adventure component itself was. But I have not yet put my finger on how to express that without just effectively handing the GM a short story.

Which might not be a terrible solution. But I’ll noodle around until I think of something else.

I doubt I will ever stop noodling on FAE. I was thinking this morning about what I would do if I wanted to write a self-contained adventure for FAE, something in the vein of a classic low level D&D module. That specifically got into the realm of character differentiation. Setting aside magic stuff for the moment, I still kind of like the idea of differentiating the fighter from the rogue from the bard and so on. So here’s a quick thought on how to throw that in.

Anyway, just a wacky idea, but it appeals to me a bit because I could pretty easily express it in a page or two for a self-contained product.