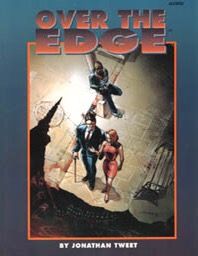 Real life events have meant we’re skipping 7th Sea for March, which is a bummer, but also means the blog has been quiet. So, sorry for that.

I have been chewing a little bit on the greatly underused OGL WARP system, the mechanics behind Over the Edge.  It’s a a very light system – roughly akin to a fractionally more crunchy Risus – and it will forever have a place in my heart as the game the completely blew open the doors of my mind regarding how an RPG character could be expressed. At the time that I read it, I’d been playing Rolemaster, and delighting in my 17 page character sheets (including spell lists).  I’d seen other systems that just used a smaller set of numbers (As small as the Amber DRPGs 4 stats) but structurally things were still built on this stat-centric idea.

OTE dispensed of that in favor of descriptors. A character could be a Burly(3d) Smuggler (4d) Art Snob (3d)  with a Terrible Sense of Humor and that would cover it (less details like name and color).  Not only did that tidily fit on an index card, it tidily and meaningfully fit in the mind. The mechanical expression was closer to the character description than I had ever seen.

So, yeah. Blew my mind. It’s influence is still pretty obvious.  There were a lot of other amazing things about Over the Edge too, but this is the one that left the deepest mark.

I mention all this because a while back, the underlying system was released under OGL by Atlas (because they’re awesome). I did up an ok PDF version of it that I’m sure I still have somewhere and which I consistently think I should get back to. But I’ve never actually done anything with it.

That might change.  I have some ideas niggling in my mind that might lead to some hacking in the near future.  So I figured I’d give at least a little heads up.