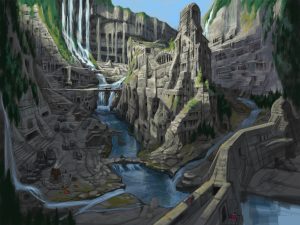 We started out the session by taking a moment to review everyone’s stories and talk about how well or poorly they’d worked out. The best assessment of their utility was which ones could be easily remembered vs. which ones had to be looked up. After some discussion, we desired to loosen up the Story structure a little bit. Rather than asking players to outline the whole story, they could fill in a little bit less – the ending and maybe the beginning – and we’d proceed from that.

It makes advancement a bit fuzzier1, but we immediately got grippier stories as the players focused on what they wanted to have happen rather than counting out the right number of steps to fulfill their mechanical obligations. They absolutely retain the right to introduce as many steps into the story as they like, but removing the obligation to do so is absolutely liberating.

I’m going to chew on his approach a little bit more and see if there’s a way to introduce it into the economy of the game. It’s easy to integrate play-wise. It’s effectively player generated milestones with a lot of explicit authority (which rocks) but I feel like it might also hold the key to addressing the spotlight issue, which could arguably be measured by who gets more story beats over time. However, that’s some future thought.

The session itself was almost entirely talky. A little bit of die rolling, but a lot of it was handled dicelessly with skills as permissions2. The trip from Kirkwall to Vendel was uneventful (a fact helped along by the warship that accompanied them most of the way) but Vendel itself was another matter. Things were tense. The docks were stuffed with Eisen ships and the taverns full of Eisen mercenaries. Everyone knew a Thane had declared himself in Kirk, but no one knew what it meant yet, but uncertainty was through the roof.

Doctor Valdis’s Patron, Red, was not at her usual coffee house, but was instead attending a meeting of the League, which the heroes got to observe some of, including some politics among the chairs, and the various voices urging caution versus immediate action. Two key points were revealed – this Thane had the support of an unknown number of Jarls (especially in the North and central parts of the nation) and that specifically he held the mint and most of the productive mines of Vesten3.

She also asked the heroes to go speak to the new Thane, since they had an existing connection to him. She was worried things were already bad because a thousand mercenaries had been sent north as soon as the new came in, and the situation may have already gone pear shape. The heroes agreed and were provided papers and a fast carriage.

The trip north was fast at first, while the posts were in good shape, but slowed down as they discovered the passing mercenaries had depleted the horse supply. They did encounter a retreating group of mercenaries who Basilio and Zeta recognize as young men from the group of Montaignian expatriates whose church they attend. By their reports, they had joined up with the hastily assembled force, but quickly found it not ot their liking, especially with the Eisen toughs, and they had been walking back for a while. They also warned of Trolls, but no one took that very seriously.

A bit further on they found signs of a battle, but very few graves. Further still was a checkpoint on the road, manned by Vesten in traditional garb. Surprisingly, they did not hassle the heroes, save to ask a few fairly normal questions. Not far past the checkpoint, the heros saw a prison camp which (presumably) held the defeated mercenaries. From that point north, the Posts were in fine order, though the people manning them were a little confused. The new Thane had apparently declared it would be business as usual.

They found their way to Kirk, which we all agreed looked like something out of Skyrim. Of note, there was now a smoking ruin where the Objectionist Cathedral’s construction site had previously stood, but otherwise all was well. Once again, inspection at the gates was businesslike, but the invocation of the Thane’s daughter’s name was sufficient to hurry them along. Meeting the Thane (Karl, played in the movie by Karl Urban, better groomed than the average vested and armed like an Eisen), they delivered letter from hisdaughter and received an invitation to dinner.

Dinner lead to conversation, much of which was a roundabout (and polite) argument between Doctor Valdis (speaking for capitalism) and the Thane (Speaking for the necessity of government), and the Thane ended up getting some support, most concretely because he too was concerned about the mercenaries on Vesten soil, and from his perspective, Vesten had been able to indulge the league because all her neighbors had been paralyzed by internal problems, but that was not a long term strategy. Vesten had to have a leader (and a military), and it had to have it’s wealth spread out further than just Vendel.

A few things came of this and followed:

The heroes agreed to take the delivery from the mint (less a meticulously documented amount for back wages for the liberated slaves) down to Vendel as a show of good faith on the Thane’s part, and as the carriage was being loaded, we wrapped for the night.