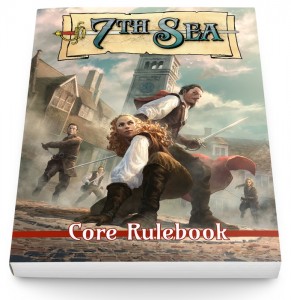 If you don’t know by now, you should – the kickstarter for the 2nd edition of 7th Sea has launched, and it has already succeeded beyond all reasonable measures, coming up on half a million dollars as a write this.

I am going to be throwing some hardballs here, so let me start with something important – I have backed the hell out of that kickstarter, and I cannot wait to get my grabby hands on the new stuff. I have devoured the quickstart. I still have several feet of first edition material on my shelf. I love this game.

But it also, historically, has made me crazy.

7th Sea was a deeply flawed gem, and it is through that lens that I am viewing my own hopes and wishes with this new version. Looking at some of the big ones:

The text of 7th sea emphasized that characters were swashbuckling heroes, but the mechanics more or less demanded that they be chumps. Part of this came from a point buy system that made essential gateways very expensive, so there just weren’t many points to go around. Part of it came from a landscape populated with NPCs who made it clear that the PCs were chumps and these were the people things were really about. There were other snags (roll & keep is a harsh mistress) but those two really hurt.

It’s hard to judge this one from the kickstarter. The mechanics seem looser and more friendly to competence, but I’ve been burned before. I am hopeful, but leery.

7th Sea’s setting was a pseudo-europe^f1, isolated from the rest of anything by ancient magic. This had lots of weird knock on effects (like removing Africa, which had all sorts of implications) but it also resulted in a really weird map. See, if you imagine just Faux-Europe, you’ve removed the Mediterranean as well as all ship traffic across the Atlantic. And when you remove those things, the immediate (very logical) question is “Where the hell are the pirates doing their thing?”

Yet despite that, pirates were a critically important part of the setting, so they got shoehorned in really hard. This was awkward enough, but it ended up encroaching on one of the other big themes of the setting (exploring ancient mysteries) by making that largely the domain of pirates because they had nothing else to do.

For 2nd edition, it looks like the map has improved somewhat. What’s more, based on the stuff they’ve show, I would wager that this moves the clock forward to support the (supremely dull) metaplot event that took down the bubble around Europe. If so, that is a big step towards being less dumb.

7th Sea may have been one of the most 90’s games of all time. In theory, there shouldn’t have been a metaplot. The timeline was frozen at a specific year, and all supplements (until the very end) were considered simultaneous. In theory, this meant a blanks slate. In practice, it was so much sleight of hand, since it just meant the actual nature of the setting was revealed over many, many supplements.

DEEP SPOILERS FOLLOW – One of the secrets of the setting was the nature of magic. It turned out that three of the types of Sorcery available to players were actually secretly gifts from the dark powers which, as they were used, were opening the way to the Bad Things. This was revealed in a supplement, and it pretty aggressively flipped the bird to anyone who thought they were playing a cool, heroic sorcerer.

Similarly, the “Secret Masters of Everything” were revealed towards the very end. The setting was littered with this crap. And it was super annoying because it was usually at the expense of “less exciting” things like heroism, swashbuckling and intrigue – the stuff a lot of people were on board for in the first place,

I have no evidence which way the 2nd edition will jump on this, but I mostly just hope the fact that this kind of thing has become less popular means it will be quietly set aside.

Fact of life: the setting was more or less Europe for Dummies, arguably Europe for dumb americans. As such, it was composed entirely of (analogs for) England, Spain, France, Germany, Italy, Russian, and someplace with Vikings and Protestants. This is dumb, but a certain amount of it is necessary dumbness. Keeping things simple kept them accessible, and that’s critically important, so I forgive the broad strokes.

Where it falls down is in the area of uneven interest. Because these were such broad strokes, you could always dig down into them to find real stuff, like faith, trade, oppression and other toothy stuff. Things like this can be great game fodder if and only if someone cares enough to see what’s exciting about it. A lot of people don’t care if commerce in Theah is nonsensical, but the people who do care, care a LOT, and they are not thrown a bone.

This extends beyond issues and into nations. It was easy to go for dumb stereotypes (Vikings! Russian barbarians!) and the quality of the nations varied greatly depending on how interested the writer seemed in actually playing in them.^f2

This one worries me the most. I’m kind of delighted that they’ve added another nation to proxy for a little more of Eastern Europe, but I don’t yet know if it’ll be awesome or if it will be a gimmick. For obvious reasons, this gets even more worrisome when you consider that they might expand to cover Africa and America. Dumb shorthand is not super helpful in that space. But on the other hand, there are some smart people helping out with this project, and they will hopefully curb it.

There are other worries, but those are my big ones, and I am really hopeful that the game manages to escape this particular pain.

^f1: Ok, yes there are also proxies for China and a mash up of Islamic empires, but they are forcibly off to the side.

^f2: This is why Vodacce is probably the most playable nation as written. But there’s a weird anomaly around Avalon (elizabeth + arthurian myth + Fae incursion + random scotsmen) where there was obviously a lot of passionate interest in the material, but the result was a mess to actual play. Avalon was a place you left to go adventuring.

10 thoughts on “Watching the 7th Sea”