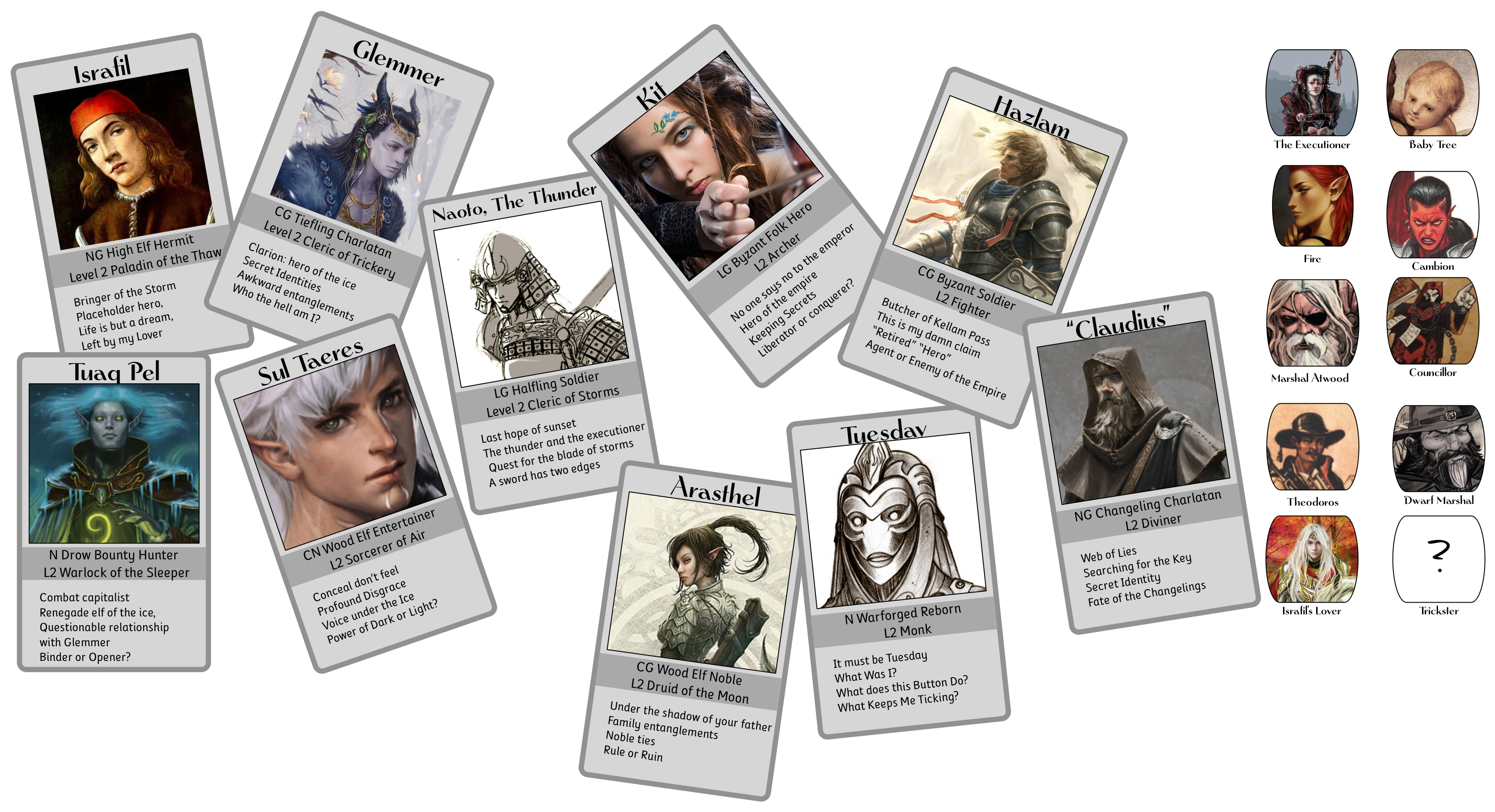 Ok, on one hand it is great that 5e supports 10 players, but on the other it is not an experience I wish to repeat too often. I am wiped (and I realized in retrospect that I’ve had much less coffee than usual today). But I should at least start the recap while it’s fairly fresh in mind.

We had 3 players who missed the previous chargen, so that was the first thing we knocked out. 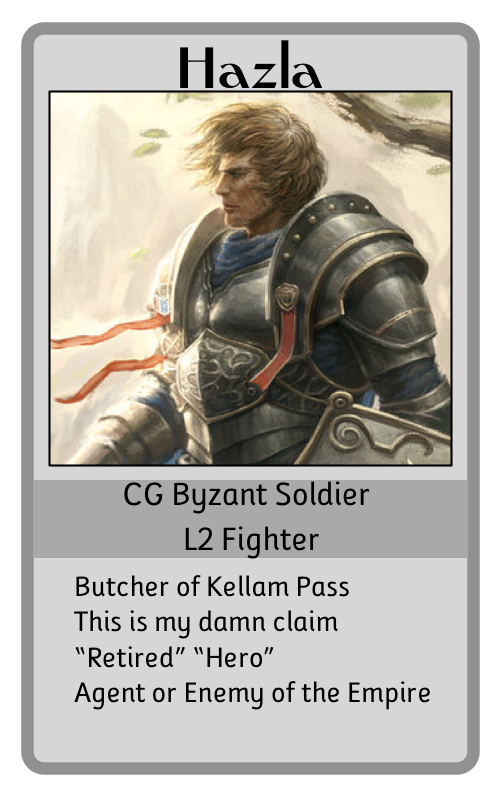 Past: The Survivor, Inverted (Sole survivor of a brutal battle between the empire and a melted shire. To the empire he’s a hero, to the halflings and others, he’s the butcher).

Present: The Owl, inverted (He was given a claim near placeholder as retirement, but it’s still frozen over. The Empire made it clear to him they’d like an agent, but he told them to piss off. Now he lives with his dogs and drinks his pension)

Future: The Carnival (Will he be drawn back into the politics of the empire, or will he be their bane in Placeholder?” 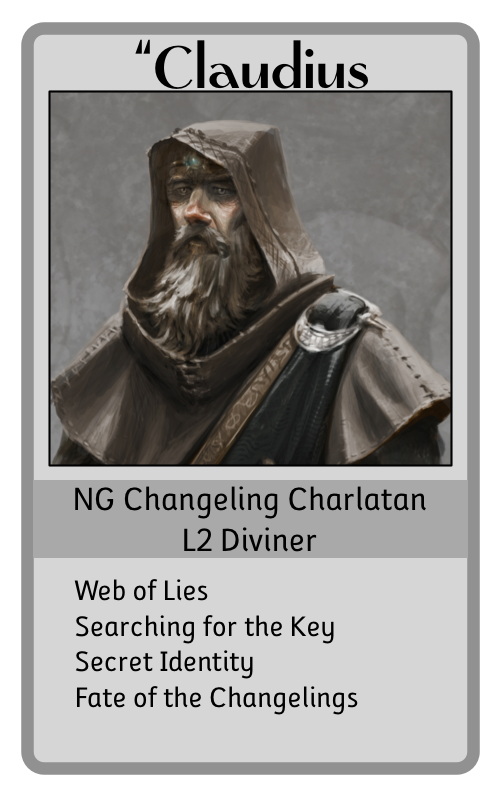 We decided that changelings operated secretly among the other races, especially humanity, but their numbers were few.

Past: The Carnival (The politics of the Changelings is brutal and messy, and while Claudius wants to trust, he cannot. He has been blackmailed by a contact in Placeholder into altering a map)

Present: The Bear, Inverted (There is a key that he’s looking for, to restore the Changelings, for they once were linked in such a way that they could trust each other. There is a key to finding one of the ancient changelings, who may still yet live beneath the ice)

Future: The Locksmith (Will he empower his people, or reveal them?) 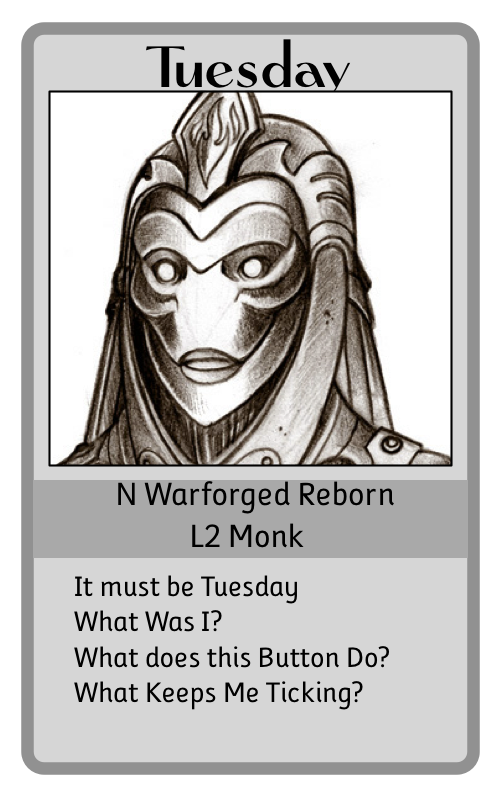 Warforged are sometimes found in the Ice, and Tuesday was one such example.

The Past: Foreign Trader (She had been found further north and sold as a curiosity, until she found her way to a tavern in Placeholder)

The Present: Avalanche (Something woke her, and it was violent. She did substantial damage before she came to her senses, remembering nothing of her own past. She’s been effectively indentured by the town to pay off the cost of the damage done. This is also where here name came from – she awoke on a Tuesday, and that is a shorthand explanation of events.

The Future: The Sickness (How long can she remain functional? – I’m not super happy with this one)

Then a quick round of connections with plot twist cards.

Hazram & Israfil (The Snitch): Hazram’s identity is something of a secret, but Isafil learned it over his cups. When a traveller threatened to reveal Hazram, Israfil scared him out of town.

Hazram & Arasthel (Sickness): When sickness struck the sled dogs, Arasthel did what she could, but was out of her depth, so it was a great surprise that the crazy drunk guy outside of town proved to be an able doctor to the beasts.

Tuesday & Sul Taeres (Schaddenfreude): It turns out that Seul Taeres was the one who jumostarted Tuesday. He doesn’t feel responsible per se, but he’s curious.

Tuesday & Naoto (Nightmare): Tuesday is the answer to Naoto’s visions. An army of Warforged would be enough to protect the Sunset Shire, certainly!

Claudius & Tuaq (Magic moment): Put a pin in this for the future – Tuaq’s pact blade is absolutely tied to Claudius’s key.

Claudius & Kit (Love Triangle): Kit has a suitor from the empire who still persists at times, much to her annoyance. What she doesn’t know is that the suitor is a changeling, who has been pressing Claudius for information.

Claudius & Glemmer (Embarrassment): Both came to a party disguised as the same person, complicated further by the original arriving. However, they managed to pull it off with some ad hoc teamwork.

And with that we launched into play. With 10 players, it was pretty much necessary to launch into thing in media res. Party was earning three weeks pay for two days work, going to a known ruin and just making sure it was still clear, since the Empire wanted to build a for there. Now, we had 10 level 2 PCs, so I was figuring the fight centerpieces would be CR4ish, but I had to be careful with that – a lot of CR4 stuff could one shot these PCs. So as a warmup, I opened with a peryton attack in a storm on the mountainside. 2 CR2 Peryton’s were not a huge threat, but they were airborne in a storm, and their ability to dive bomb and get away made them disproportionately dangerous.

Fight went ok. Lots of use of advantage and disadvantage, and I think it let everyone shake out their characters a little bit. I let them take a long rest before the centerpiece fight – I had 4 Azer (CR2) who had a Helmed Horror (CR4) in a box. I’d been planning for the Horror to be a follow up fight, but player actions lead to them hitting the panic butting early, and the Horror joining the fight in round 3. The Azers themselves were tough but manageable, and after some initial dice luck (two crits in close succession) things turned around slowly. The Horror was another story entirely – since I described it activating, I had not considered that one of the players might grab his sword before he fully awoke, but that is exactly what Tuesday did (taking advantage of the Diviner’s 20 to do so) and so the Horror was much less dangerous than it should have been, since it kept failing to get the sword back, something the party helped with via illusions, hexes and general misdirection. By the time the thing was ready to just tart punching stuff, they’d finished it off.

Turns out there was a secret chamber the Azer had been sent to open up, and the Horror was going to be the muscle in dealing with it. So, naturally, the party cracked it open and went toe to toe with a Zombie beholder. It was CR5 and had the potential for some big hits (and, in fact, dropped Sul Taeres and reduced Israfil to 1HP) but the party managed to eventually take it down (that zombie resilience ability is kind of nasty).

We wrapped up, got a little bit of treasure and I let everyone advance to level 3. I don’t intend to be that generous with advancement in general, but level 3 is when a lot of classes cement themselves, so I felt good getting to that point.

All in all it was fun but fatiguing, and I have a few random thoughts: