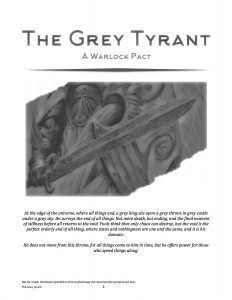 After waffling a bit, I broke down and converted the Grey Tyrant (a warlock background I had written) into a PDF, and submitted it to the DM’s Guild, so I could get a hands on sense of the experience. This was last night, so it’s still an ongoing process, but it’s been interesting so far.

I imposed some limitations on myself for this process. Obviously, I have access to a lot of tools for making one of these things, but I want to keep myself working at the “fan” level, so I opted to build it using the Word template provided by WOTC and a consumer level graphics program (Pixelmator, in this case). I already had most of the copy, so that required only a few tweaks, which meant this was largely a pure exercise of “turn this text into a product”.

The word template itself was a little painful. Possibly a lot painful, depending on your experience. I don’t fault the WOTC guys for this – as much as Word is a crappy tool to use for layout, it’s the tool more people will have, so it is only reasonable to support it. And the doc template is not entirely without thought – as one would hope, it’s style based, and that’s great, but it is way overcluttered and its font use is…capricious. I forced myself to use it (as much as I could) for this project, but for any future efforts I would definitely just start from a blank page.

Because I did not want the front page to just be some text (the DM’s Guild has lots of those, and they are not appealing) I needed some sort of art, so it was time to go back to 2002, where the model was “Find an image you’re allowed to use, apply some filters, and BAM, you’ve got art!”. The problem, of course was that due to the nature of the DM’s Guild license, I could nto use any external art. If I owned it, I’d be giving it to the DM’s Guild community. If I did not own it, I did not have the rights to give it to the community. So I was limited to the art that WOTC had offered as DM’s Guild resources, which is entirely maps and monsters.

I admit I spent a little time extracting page-edges from he maps, but then I remembered that Word sucks at edge to edge effects, so I discarded that. That left the cover. In my mind, the ideal cover image is a grey armored figure sitting on a grey throne over a dark abyss. Since I wasn’t going to get that, I went looking for something I could repurpose – maybe an armored giant or something. No dice, so I eventually just took a slice of one of the celestials, turned it black and white, applied some filters and called it a day. It’s far from striking, but it’s functional. Biggest problem is that grey is a terrible color for a cover – it might be thematic, but it looks very dull on the page.

This is, I should add, a total band aid solution. Not super satisfying.

After I had the doc ready and converted to PDF, I hesitated a bit because I knew this was a one way trip, but I was doing this for science, so what the hell. I followed the instructions provided and kind of stumbled along. Biggest point of confusion – uploading a file and setting up a product are entirely unrelated processes. I set up the product completely without ever uploading the file, and when I finished, I had no idea what had happened. Poking around a bit, I then uploaded the file, and it all started working. Clunky and counterintuitive, but functional. I also had to make not to explicitly flip it to public, something that would have been easy to overlook (as I understand, all this is normal SOP for Drivethru uploads). It informed me that there would be some hang time before it went live, but that ended up only a couple minutes. I should note, there was an additional legal agreement as part of upload, a very ominous one. I have gotten conflicting reports whether it’s the bog standard drive thru “you give up all rights because we need to put your stuff on server” agreement or something new. Still sorting that out.

More seriously, that’s nice, but I admit I’m viewing this more like I have marked a fish and thrown it into unknown waters so I can track its progress and get a certain amount of sense of the environment. The DM’s Guild is new but rapidly evolving, and I am super curious about the shape of it.

I admit, the whole thing went a lot more painlessly than I expected. Enough so that it’s tempting to toss in a few more fish. Not sure if that’s a real thought, or just a momentary flush of temptation, so I’m going to have to watch that. I definitely wouldn’t want to do it with anything heavy duty, but small stuff that really has no value for me outside of the context of 5e? I could see it.

But it definitely requires making peace with giving up ownership of your work. That can be super hard if you’re a self-publisher, but I expect a lot of people who have worked freelance are wondering what the big deal is. If you think of it as freelancing for WOTC, the gaping maw seems a little bit less onerous (though it makes the whole arrangement seem weirder).

So, so far so good. Will report again after it’s had some time to percolate.

5 thoughts on “Trying Out The DM’s Guild”