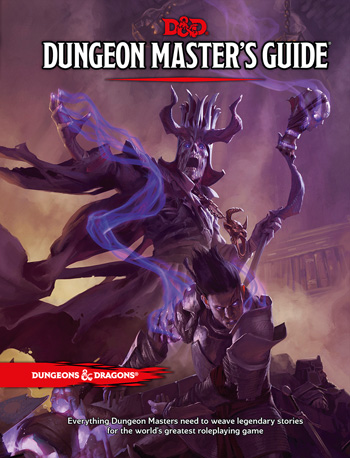 For folks playing at home, this kicks off my dive into the 5e Dungeon Master’s Guide, similar to previous dives into the Player’s Handbook and Monster Manual. I originally was going to pass on this one because I felt I would be starting to late, but some nice folks persuaded me that the book is fairly evergreen, so the window is much wider than I may have thought.

The Dungeon Master’s guide is, physically, about what you would expect from the series so far. The weirdness with the flame on the binding seems to have been a function of the third party book, so nothing stands out as a problem, and it’s got that nice mix of gloss and matte that makes all these books a joy to pick up.

I’m a little torn on the cover. On one hand, it’s another book without a dragon on the cover, but I don’t actually mind that. My first DMG was the 1e printing with the  (edit: Nope, it was Jeff Easely. I’m a bad nerd, and thanks to @newbiedm for the correction) painting of the cowled figure opening the door. That one’s iconic for me, so I admit it’s on my mind as I look at this.

The choice of a Lich makes sense, especially if you’re not going to use a dragon. As with the Beholder on the cover of the Monster Manual, it’s another iconic, scary creature. And this one definitely looks lich-y. But for all that, the cover leaves me a little flat – the color is such a uniform wash of purple tha nothing stands out. I have to actively remind myself that there’s a second figure on the cover. None of that is great. I suppose the thinking was to give it a strong sense of color (to differentiate it from the red of the PHB and the – blue, I guess? – of the DMG. There might be some branding genius to it that I don’t get, but ultimately its much more blah than it could be.

Thankfully, the interior has no such problems. Like the other books, it’s well laid out and awash with art. It’s roughly similar to the Players Handbook in this regard, but there is (appropriately) less of an emphasis on characters and more on items and maps. The maps, in particular, warm my heart. They are many and varied, including an entire appendix of just random maps (I assume people have already posted adventures that use them) though my favorite is the town on page 115. It’s hard to see something like that an not want to use it in a game.

The art is full of great classic nods to things like Baba Yaga’s Hut and The Tomb of Horrors, and ranges from epic full page splashes to elemental vistas to an utterly adorable rendition of the great modern parch. My sense from the PHB that WOTC was really investing in a different artistic feel had been reinforced by the MM and it feels fully cemented here. The only complaint I could raise is that it lacks the diversity that was so much the signature of the PHB. It is not terrible in this regard – there is definitely some diversity, and the comparative lack of character images means that there’s no way it could possibly compare to the PHB. But at the same time, the PHB set the bar high enough that it’s noteworthy that the DMG passes under it (if only by a bit).

Credits page includes a nice genealogy of the DMG in its attribution, which is pleasant to see. It also includes a bit of a humorous disclaimer[1] which I’m confident will rub some readers the wrong way. I actually am not sure how to take it – it’s a joke, of course, but is it a flag that we’re going be getting a conversational, jocular kind of DMG, or is it just a one off?

When the first line is “It’s good to be the Dungeon Master!”, that seems to argue for “jocular”. There’s an interesting point in the first paragraph that explicitly note that this book assumes rules familiarity. That’s an interesting message, but one that’s consistent with how 5e seems to have been split up. As has been the trend, more anymore of the essential rules of the game exist in the PHB, but that makes the decision of what to keep in the DMG all the more interesting.

I have to admit that I am poring over every word in this introduction in an attempt to capture the underlying message. “What is the GM’s role?” is one of those questions that can spawn any number of arguments, and the position that D&D takes on this carries massive weight. It is the primary example, and even the smallest shift from the past is noteworthy.

The best summary for the expected role of the DM can be found in the three subheaders of this section. They are, in order. Master of the World, Master of the Adventure and Master of Rules. That’s a curious order, and it is hard not to wonder if it reflects relative importance. If so, there are two interesting things going on here.

The first is that mentioning rules last sends a number of interesting messages, not the least of which is that the rules are not the be-all-end-all of play. That is not exactly revolutionary, but it is controversial on more than one axis. That the book describes the GM as a “mediator between the rules and the players” is also kind of interesting as it supports the idea that the GM’s job is different than that of the players, but does not necessarily suggest a power dynamic. That kind of nicely walks a line that is classically rife with trouble.

The second, and more interesting to me, is that worlds are given pre-eminence (in both position and wordcount) over adventures. Now, in terms of difficulty, this seems backwards – running adventures is tricky business, and it takes work – but I think it reflects a different priority, one that I respect a lot. For me, the master of the world subsection speaks to is one of the most fun elements of GMing. Crafting a setting (alone or with feedback) populating it, thinking long and hard about it, then offering a window into it through play is an intensely satisfying experience (at least for me). I have to give big props to the book for focusing on why it’s fun to GM before getting into why it’s work.

The introduction ends with a single page on knowing your players which is surprisingly well crafted. Most critically, it does not talk about types or players, but rather, about thinks your players may enjoy doing[2]. On one level, this is a fine distinction – one could have talks about “actors” rather than “acting”, but by couching these things in actions, you get much closer to the reality that your players are more complicated than any type, and that they can probably have fun in a lot of different ways.

Even better, these action are also accompanied by straightforward, actionable advice. For example:

Those are not Principles from Apocalypse World, but you would be forgiven for seeing a family resemblance. Now, there’s a whole philosophical discussion to be had about what it means to include these things as guidelines rather than “rules”, and I’ll happily leave that to those more invested in the distinction. I’m a big fan of guidelines, especially when well articulated, and as a single page of advice goes, this is pretty good.

All in all, it’s a promising start, and for the people who need them, the red flags have already been raised, as is only fair.  I very much look forward to getting into the meat of it.

Because the universe has a sense of humor, at the same time I decided to pick this up, Bruce Baugh (of Adventure!, Wraith and about a bazillion awesome thing) also started doing his deep dive on the DMG. You should absolutely check it out over on google plus.

4 thoughts on “DMG – Product and Introduction”