So, Mappers session 2 went well, if in a somewhat unexpected fashion.

As planned, we had a cast change. Urv generally can’t make Fridays, and Dogan had a commitment, so the only character coming forward was Jack, the Thief. The new character added to the mix was Shrike, the chaotic human ranger, with his savage mule, Iggy[1]. I had a handout with the key information, and I had Shrike’s player add a new location to each city, so I’ve updated that.[2] It was determined that Shrike came from Umulon, and he had a big streak of fighting the man and striking back at the oppressive (yet still vaguely defined) rulership of that city. Shrike had never played Dungeon World before, so this was also a learning game, but he picked it up quickly. 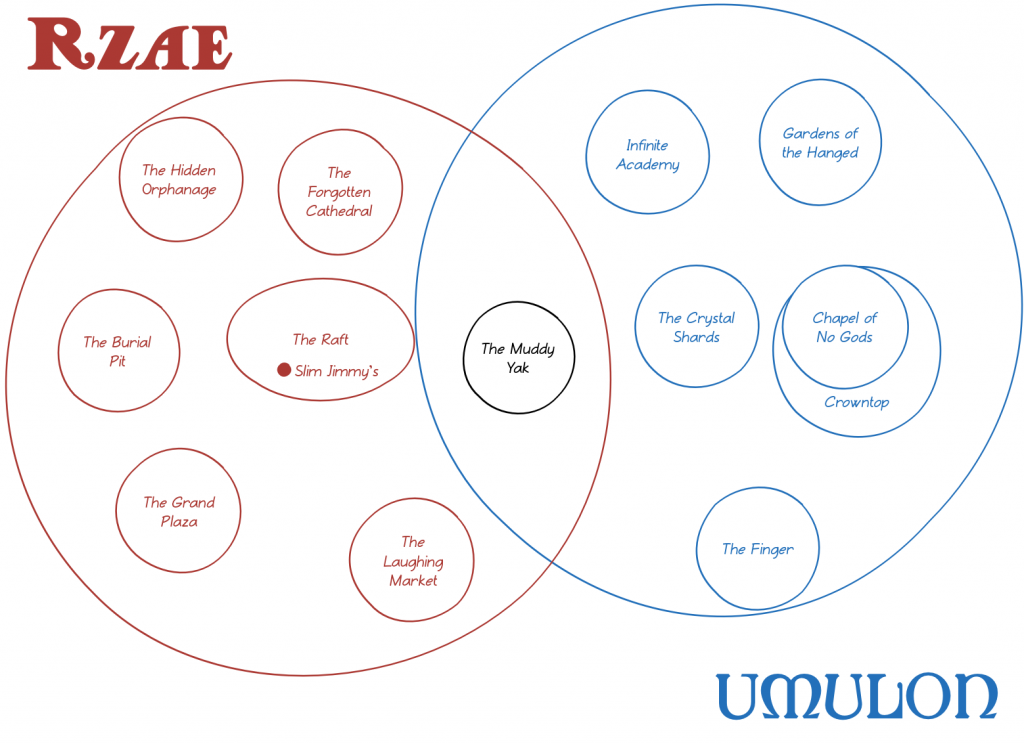 Once that was done, I copied down Jack & Shrike’s alignment moves and their bonds to each other[3] and basically asked myself how I could hit the maximum number of these. Alignments were the most useful, since they were action-oriented – they clearly needed to sneak in somewhere and rescue someone – and the bonds informed on that. Technique-wise, this is very similar to what I do with aspects when pulling something together for Fate. For this purpose, the bonds were a little bit less toothy than I’d hoped, but they were still useful.

With that, I had a frame: a swank party of Umulon’s upper crust, and a prisoner somewhere in the building. I decided it was in The Finger, because we hadn’t really gotten into it yet, but that was the extent of the details before the two questions.

To Jack: How did you manage to arrange for you two to be at this party?

To Shrike: Who is in the basement that you need to rescue?

Predictably, the details flowed in from there. The party was a fundraiser for “orphans” that was really a political fundraiser that was part of the ramp up to Umulon’s forthcoming elections. Jack had helped an Um moneylender named Kostis Samaras cover up is affair with Mrs. Lusk, another moneylender’s wife, and in return for the favor had scored tickets. Shrike had talked Jack into this[4] on the idea that it would be rich pickings but his real purpose was to rescue Gregor Bomamici, younger brother of the Minister of Roads, Anne Bonamici. Anne was a tolerably honest politician, and Danzen Mulkey, the gent running the party, was using her brother to black mail her into announcing that she would not be seeking re-election, and the announcement was to be part of the evening’s festivities.[5]

So, that’s where things started, and from there they went…very, very badly. It is my expectation that Dungeon World will largely be propelled forward by the complications on 7–9 results, but this session proved to be an exception as there were startlingly few 7–9 results and LOTS of failures, and when they did not fail, they tended to roll spectacularly.

It all started well enough. Jack got made by Mrs. Lusk, but beat a hasty retreat out one of the main hall. He managed to put some Goldenroot (“trust me” poison) in a punch bowl and attempted to knock out a servant to get a uniform. This went badly, resulting in Jack fleeing from the oncoming rush of guards. The good news was that this gave Shrike the opportunity to slip off through a different exit, one that lead downstairs and was now unguarded.

Jack eluded the guards by going higher in the tower, out of the common areas and into the places where the traps start showing up. I thought this would be a nice opportunity for Jack to show off, but the dice had other ideas. So we cut back to Shrike, who had found where Gregor was being held, but could not get through the locked door, and so he set off to find Jack.[6] And he did, with the small complication that Jack was standing on a stairwell completely encased in ice.

So, Shrike pushed him down the stairs. I was totally ready for the hard choice to be between “Jack gets hurt” and “it makes a lot of noise” and the dice decided it would be both. So, a couple of guards show up and a fight followed where Shrike’s dramatic dive down the stairs ended with a head injury. They managed to overcome the guards and get away ahead of reinforcements, and followed Shrike’s route back to the cellar.

They got there just ahead of the guards, but Jack absolutely nailed the Tricks of the Trade roll, so they got the door open fast, dumped a bunch of casks of wine (and stole 3 nice bottles) to block the guards and fled into the tower again. After a series of further screw ups (Jack should never try to knock anyone out, ever) Jack got a servants uniform and managed to smuggle Gregor onto the floor while Shrike got up into one of the overlooking balcony.

They did manage a great exit – because of the poisoned punch bowl, one of the high stakes poker tables had a huge pile of cash on it (since no one was calling), which Jack grabbed (tablecloth and all) while Shrike swung down on a rope, grabbed Jack and continued up and out through a window which should have come out on the stable roof, but in fact resulted in a somewhat longer drop. Iggy was not amused.

It kind of went downhill from there, fleeing with the Godless Cavaliers (who had been summoned) in hot pursuit. Losing their horses fleeing into a park, getting entangled in thorns, encountering the mistress of those thorns who then killed one of the pursuing cavaliers to ritually gather his heartsblood before departing along with any evidence that it had been anyone but Jack and Shrike responsible for the death. That lead to more fleeing, finally succeeding in finding a way that dumped them in the graveyard that surrounds the Forgotten Cathedral and the things in the fog. More fleeing, a reasonably tactful exchange with some grave robbers, fleeing again, getting to a wall, finding a weak spot for Iggy to kick down, fleeing into the street and because the dice demanded it, faced an attempted mugging which they survived solely because Iggy was far and away the most capable of the three.

At the end, they had pretty much lost all the money they stole (it had fallen away in dribs, drabs and choices as they went) save for the three bottles of wine, and that’s where we wrapped.

In case it’s not clear how many failures got rolled, both characters had double digit XP by the end of the session. Jack actually leveled twice (since she had a bit left from the first session).

All in all, it went well. The first half was stronger than the second half, which suffered from being a bit too much of a string of odd events rather than anything coherent. In retrospect, I should have done a full regroup to another pair of questions, so I’ll bear that in mind for the future.