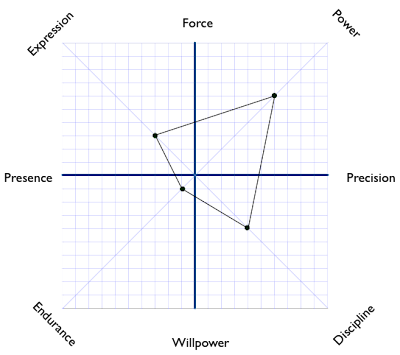 OK, what this means to me:
The assumption is a 4 stat set in the spirit of Amber. The 4 stats are Endurance, Discipline, Power and Expression, with 4 derived stats, Willpower (Discipline & Endurance), Precision (Discipline & Power), Force (Power & Expression) and Presence (Expression & Endurance).
The core model is a double-paired idea of internal/external and Active/Passive.
Power is external/active – it covers action. Action tempered by discipline is precision (a lot of stuff traditionally thought of as Dexterity) while Force is the expression of action (think Strength).
Endurance is External/Passive, though that’s hopefully obvious. Presence is patient, long term interaction with others, while willpower is the combination of Endurance and Discipline. I am attached to willpower being derived because it tends to be a giant pain in the ass in play, though that’s a whole other topic.
Discipline is Internal/Passive, and it’s a whole topic in and of itself.
Expression is Internal/Active, which is a little weird on the surface of it, but works if you view Internal as including personality, then it becomes a nice middle-place for Charisma.
Anyway, that’s the bones of it. Still chewing on it.

11 thoughts on “I Woke Up With This In My Head”