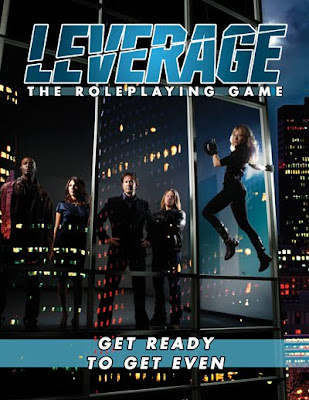 The Leverage RPG went live yesterday! You can buy the PDF now, or if you order the book through the MWP Store you get the PDF with your order (Physical books are probably a few weeks out – shipping is a bear). I’ve already got my PDF, and it’s absolutely lovely, and I’m loving it as I read.[1]

This is a great game of capers and unconventional justice by a great team masterminded by Cam Banks (try his novel!) with Matt Forbeck (try his novel too!) and Clark Valentine casing the joint, Tiara Lynn Agresta and Stephanie Ford distracting the guards, Fred Hicks and Laura Anne Gilman taking out the security system and Ryan Macklin and Amanda Valentine making off with the goods. With a crew like that, it’s hard not to rock out, and I’m super-pleased I got to be a part of it.

The development of Leverage was pretty interesting because a lot of it happened in parallel to the work Josh Roby‘s team was doing for Smallville, but neither team had any visibility into what the other was doing. Even so, there are some similarities between the games that sprung from similar inspirations, but they are definitely very different games designed to serve very different purposes. And I’m happy about that. Don’t get me wrong – Smallville is freaking brilliant, but if we had just made a different version of it for Leverage, I think it would have hit the wrong note. Smallville is a relationship based action-drama, Leverage is a caper. There may be similar elements of relationship and action, but the emphasis is very different in ways that I think the two games reflect.

Now, obviously, I’m biased in favor of the game (though the one review I’ve seen so far was pretty positive so maybe it’s not just me) so I absolutely think you should pick it up. But knowing that it takes more than that, let me note 3 different awesome things.

1. Distinctions
Distinctions are like aspects in that they are free form descriptors like “Crazy” or “Sterling Always Wins” which might be good or bad for the character in any given roll, but unlike aspects, their application is in the player’s hands. When a player uses a distinction, they decide if it helps (in which case they roll an extra d8) or if it gets in the way (in which case they get a plot point and roll an extra d4). Why do they roll a d4 rather than take a penalty? I’m glad you asked!

2. The Rule of 1
So, the basic mechanic is roll some dice, add together the best two. The base two dice are one for an attribute (Agility, Alertness etc,.) and one for a role (Hitter, Hacker etc.) with other dice being thrown in by props, distinctions and other circumstances. Pretty simple, and given that characters are quite capable, it’s not had to succeed within your sphere. But there’s a catch.

See, 1’s are problematic. Dice that come up 1’s (even if unused) on a player’s roll introduce complications into the situation, while dice that come up 1’s for the GM create opportunities for the players, and many abilities trigger off this. The net result is that you can get very nuanced outcomes to rolls, with clear success at the task at hand, but all manner of trouble spinning off from it.

Because of this, d4s are dangerous[2]. Sure, any die can throw up a 1 at a bad time, but d4s just invite it. Adding a d4 to a roll is unlikely to help much but it greatly increases the chances of something going wrong without increasing the chances of failure, and that’s a very important distinction. It is far more in keeping with the spirit of the show to have things go wrong than to have the characters suck.

3. Caper Generation Tables
Yep. Roll up a caper. I mean, yes, there’s also advice for fleshing it out and running it, but random tables to roll up a client, a mark and a situation? How is that not super fun?

There are other awesome things. Cha0s’s distinctions (page 153 of the PDF). The fact that you could really get away with index-card sized character sheets. That the book looks REALLY frickkin’ sweet. But you get the idea.

I admit, I’m really curious to see reactions to the game. Part of that is normal egoism, sure, but there’s a bit more to it. See, if you had asked a year ago, I think it would be safe to say that the Cortex system would have been described as workmanlike. It was a solid little stat + skill generic system, and while it had evolved through iterations[3], the system was very much second fiddle to the licenses it accompanied. With Smallville, I think this dynamic shifted – the Smallville mechanics are so good that the game has a lot of appeal for gamers who are not fans of the show.

My hope is that Leverage will have a similar mechanical appeal (though I love the show, so I’m also all for bringing in the fans), and that between the two games, we’ll have helped create the idea that Cortex Plus (and by extension, MWP games under the guiding hand of Cam Banks) is a great system, one that makes for games as good as the licenses they support.

And, well, more shallowly, I love this game, and I hope other people love it too.

1 – I always need to read things I’ve written for, in part because my the time they come out I have usually totally forgotten what I wrote or, more problematically, I remember every version of it and can no longer recall which was the final one.

2 – Hat tip to Dogs in the Vineyard, for the roots of this idea.

3 – If your instinctive reaction to this is to tell me how badly it was a mismatch with Firefly, I’ll ask you to hold on for a second. Yes, boating, I know. But the Big Damn Heroes supplement really put some polish on it, and is well worth a look. Of course, now that there’s Smallville and Leverage, I’d probably use one of those, depending on how I wanted to emphasize things.

10 thoughts on “Leverage is Here!”