Man, ok, time to change gears, if only for my sanity. As fun as it has been to delve into Dragon Age, that’s some thinky stuff, and my brain is starting to smoke a bit, so let me shift gears a bit. As a warning, there are some very light spoilers for the 4th and 5th season of Supernatural below – probably not enough to be a real problem, but you’ve been warned.

By now, a lot of people have learned about the advantages of using relationship maps (r-maps) as a useful tool for keeping track of characters and groups in a game, and as a source of inspiration. For example: 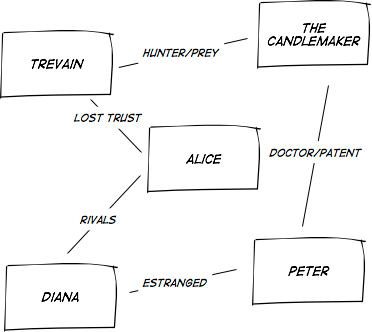 It’s benefits are, hopefully, pretty obvious. Organizing the information visually makes it easy for me to ask all the right questions when I want to do something in the setting, like “Who will it impact? What effects will that have? If I do something bad HERE what happens THERE? If I add a new element over here, what should I connect it to and how?” Certainly, I could track all this information in lists or notes, but the visual component makes it much easier for me to grasp the interactions between elements.

This is all well and good, but it’s not actually what was on my mind. See, I’m a big fan of the television show Supernatural. It’s got monster hunting and rock and roll and all that, but it’s also got some really potent relationships between the characters. This took an interesting turn in recent seasons where it turned out that the larger conflict of the story was pretty much a mirror of the personal conflicts between the characters.

It’s a little heavy-handed (but appropriate to the series) as it’s done, but the idea is a pretty potent one, and one use of relationship maps is that they make it very easy to do – all you need to do is scrub the names and keep the relationships. So I can take the previous R-Map and tweak it to represent the various conspiracies at work in the world. 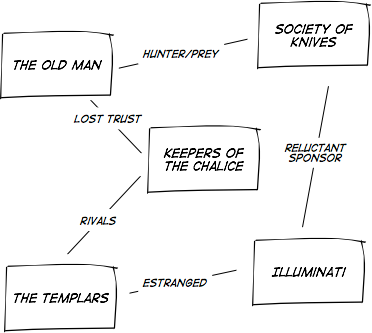 (Doctor/Patient needed to be tweaked, but it wasn’t hard to come up with an equivalent)

Obviously, this is a pretty simple example, but the point is that it’s one more thing that relationship maps can be useful for.