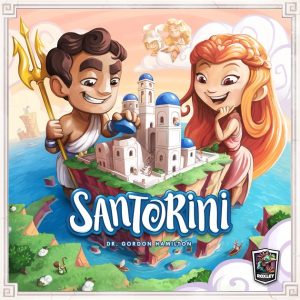 I Was in the position of entertaining a tween the other day, so I busted out Santorini. If you’re unfamiliar with it, Santorini is a delightful boardgame of tower building and Greek gods. It’s a favorite around our household.

But what made it very useful in this context was something else. While it is a very deep, flexible and replayable game, its core is incredibly simple: move a builder, then place a tower piece, plus some win conditions. It literally took more time for us to open up the box and set up than it took for me to teach everything he needed to know to play.

Now, if this was all there was to the game, it would be fun but shallow(but, critically, it’s still fun in its simplest form), but the game has space for additional layers of complexity. Once you know the rules, each player can take on the role of one of the gods, which allows them to add one special move to the game (Hermes can move his units farther, for example). There are varying levels of complexity to the gods, and the game unfolds uniquely based on the interplay between the gods chosen (all to say nothing of other expansions, like heroes).

So the result is something that is trivial to learn, immediately rewarding to play, but scales up in complexity and depth with player interest. That’s pretty awesome.

Ok, so with that in mind, I want to bring up another conversation that threaded through Metatopia.

PAX unplugged is coming up in about two weeks, and a lot of people are going to be curious how it goes. Last year it was a whole new thing, and no one knew quite what to expect, and some of our guesses were just wrong.

Most tellingly, the reports from people in the dealer’s hall were wildly varied – some booths sold like mad, while others had very little traction at all. This is a little bit weird, but I have a theory about it based on my own observations. See, the PAX unplugged crowd was not the usual gaming convention crowd – they were the PAX crowd – and they brought in a different culture. This showed up in a lot of ways (they are WAY more line tolerant, for one thing) but was maybe most interesting in relation to games.

What I observed was that it was a crowd with a deep enthusiasm for games and play, but not necessarily a lot of patience. There’s a cynical interpretation of that, but I largely took it as a result of them not having bought into the various things we think about how games “should” be. Most specifically, this meant they wanted games that they could buy, walk over to a table, and play.

That makes sense when you say it out loud, but when I stop an think about most “gamer” games, especially RPGs, the disconnect becomes apparent. Most RPG purchases follow more of a pattern of “One person buys it, spends time reading it, then spends time prepping, then gathers a group to try this thing out”. I don’t tend to think much of it because that’s just how it’s done, but to a newcomer that has got to just seem stupid.

Presuming this is a market we want to reach out to (I know I do), it raises the question of what needs to change. “Quick Start” sets have been around in RPGs forever, but they are usually more like marketing promos or GM aids than anything to actually help play start quickly.[1]. Tech tricks like putting choose your own adventures in the game book have helped shorten the ramp-up for prospective GMs, but that only produces marginal results.

We’ve seen decent success with semi-RPG boardgames (Gloomhaven being the current hotness) that hit many RPG notes but use boardgame style setup. This is interesting and educational to me, but it’s not a line I wish to pursue because it solves different problems than the ones that intrigue me. That it, removing the parts that make RPGs hard also removes the parts that make them most interesting to me.

To this end I am intrigued by the rising “Larp in a Box” category, which you can see in Ghost Court and which I expect is going to EXPLODE on the scene when the new release of Fiasco comes out. Unsurprising, since the Bully Pulpit folks are crazy clever. There’s also some really neat emergent play tech happening in things like Alex Roberts’ For The Queen.

So I’m watching these things and taking notes, because the thing I realized while playing with that tween is that what I ultimately want is to be able to deliver that Santorini experience with an RPG. Get playing immediately and enjoyably, but be able to expand complexity with mastery and interest.

It should be doable. I can see the pieces of it in my head. But getting them to gel is going to be the trick.

1 – Eternal exception for the Exalted QuickStart, which was not much of a pointer for Exalted as written, but in its own terms was one of the best games I’ve ever read.

8 thoughts on “The Santorini Experience”