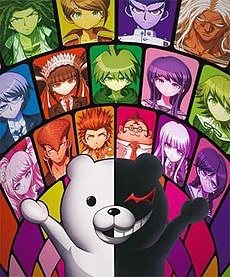 As a result of my niece’s interest, I am now playing the first Danganronpa game. I admit, I had not been previously aware of this series (It’s a video game, and there have been several), and while I’m only a little bit in, I’m hooked. It’s sort of a character-driven-visual-story-puzzler-mystery full of anime tropes with a layer of weirdness. Which is to say, it’s very much to my taste.

I may talk more about the game itself later, but a thing that’s fascinating me about it is that part of the premise is that each character is the “ultimate” something (ultimate pop star, ultimate martial artist, ultimate programmer and so on). It’s a key part of the fiction, but it’s an idea that kind of intrigues me from a game perspective.

One of the key truths of comic books is that the fans love the question of which character would win a fight. Old hands and writers roll their eyes and explain that it depends on who is writing. And that’s true, as far as it goes, but that overlooks a lot of assumptions about the characters and writing.

Yes, it is entirely possible for a writer to insert a Squirrel Girl beats Thanos victory and it’s a thing that happens, but that is not an answer to the instinct that drives the question, it’s an active snub. This is fine if you’re paid to write comics, but works less well for GMs.

What people asking that question are looking for (besides validation of their favs) is a satisfying answer, which is to say one which is consistent with the characters and the stories as they understand them (and their opinions on the “right” answer are usually expressions of their understanding.

To make that concrete, if Batman beats Superman because he had a clever plan that leveraged Superman’s weaknesses, then that’s satisfying because it’s true to both characters, and tells us something about them both. If Batman beats Superman because he’s been bitten by a kryptonian werewolf and temporarily is more powerful than Supes, then that’s a valid story but a deeply unsatisfying answer because it isn’t about the characters.

These may seem like disconnected threads, so let me pull them back together – that idea of a satisfying resolution is an essential part of almost any GM decision about character capability, because that is what the player is looking for when we talk about respecting a character’s capability.

Which brings me back to those “Ultimates” from Danganronpa. In simplest game terms, each of them has an arena where they are guaranteed to win any conflict, and a penumbra of related things where they are likely very capable.

Resolving their ultimates is easy to resolve, but the penumbra is where things get interesting. To come back to Batman & Superman, there is a reason the question is “who would win?”, not “Who can lift more?”. The easy question introduces no tension. I look at two characters in this show and I wonder how a conflict (social, physical, mental, whatever) between them would resolve and how I’d model that in a game.

And the thing that it reveals to me is that the winner is the uninteresting part of the question, and that the key is what this shows about the character.

Sorry for the rambling nature of this one – I’m wrestling with some thoughts about what dice are FOR, and this all feeds into it.

2 thoughts on “Who Would Win”