Anyone familiar with the Second Edition of Fate knows that we made heavy use of challenge tracks. They were useful for all kinds of things, from running debates to casting spells to playing chess (the chess example is one of my favorites to date). A challenge track was a set of boxes, often with difficulties at different levels, and triggers at various points along the way. They provided a tool for tracking the results of actions that could not reasonably be accomplished in a single roll.

The stress tracks that exist in Fate Core are the only remnant of this once-ubiquitous tech. The reason is simple – it was a little bit too fiddly for what it was trying to accomplish, so it got dropped in favor of smoother resolution. There’s some regret to that, sure, but it was the right direction at the time.

That was my general take on this until a few months ago when I read Blades in the Dark and was delighted by John’s approach to clocks because it specifically solved a lot of the complexity problems that we had with challenge tracks, and did so with style and grace. And as is my wont with such things, I am now going to mug BitD in a dark alley and go through its pockets for change.

Before I begin, a couple caveats.

With that out of the way, let’s talk about Tracks.

A track is a set of boxes (usually – more on that in a bit) used to measure progress towards a goal. It’s pretty basic – some things cause boxes to be checked off, and when the final box is filled in, the thing happens. Simple as that!

So, for example, if you have a crew of adventurer’s sneaking into a guarded manor, you might create a track for the alertness level of the guards. As play proceeds, loud actions (like fights) or other misadventures might check off boxes, and when the last box is checked, the alarm is sounded, and the situation goes from bad to worse. 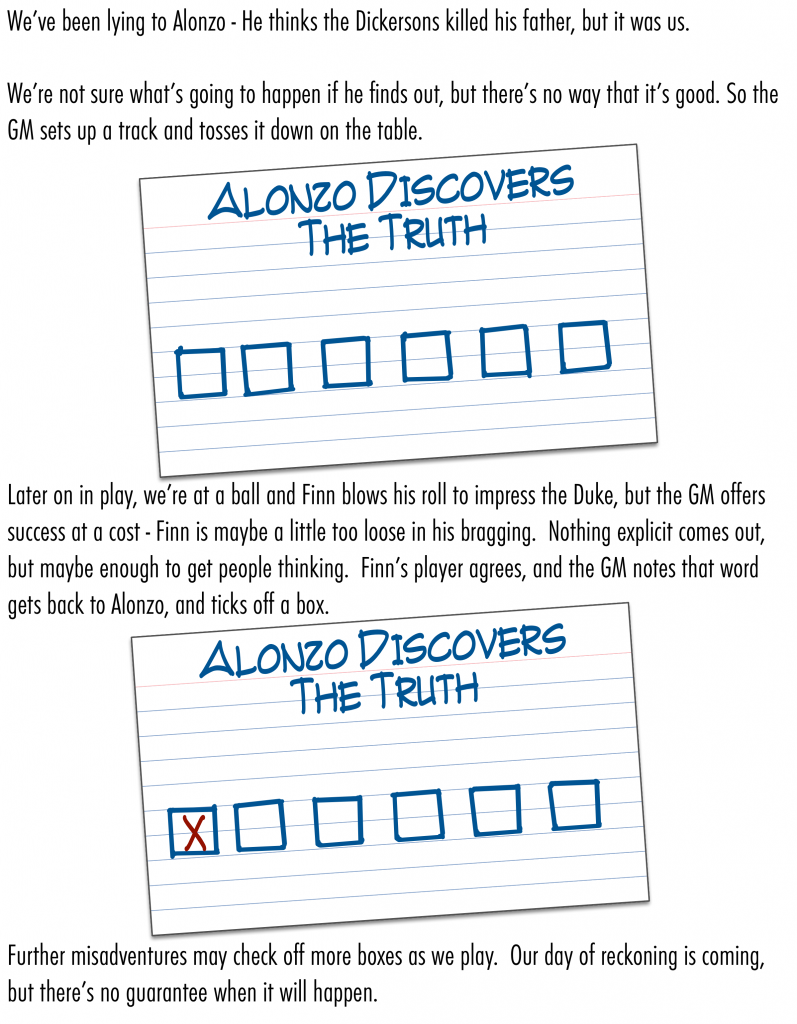 Easy enough, but the example reveals a few key question about tracks, and point us to the things that we, as GMs, want to know about any track we create1.

To come up with a track, you need to know:

Now, broken down into a list, that may seem a little fiddly, but the actual flow is quite organic.

This is largely simple, but with a little bit of nuance – it’s what’s going to happen when the track fills up. But, critically, it’s not necessary everything that’s going to happen. That is, the consequences can be part of the track, but often the track is about a triggering event, with the consequences to be inferred. Sometimes they’re very obvious, in the case of “Manor House Alertness”, but sometimes they’re an open ended statement like, like “Alfonzo Discovers the Truth”.

It’s easy to get spun up on this if you think about it too strictly and start laying down what sort of skills and actions drive these things. That sort of structure makes sense when the purpose of the track is to represent a specific task or challenge – for example, if you’ve got a track going for finding the location of a hidden artifact, then each successful research scene (or roll, or session, depending2) might tick off a box.

For tracks that are less direct – especially ones that represent risks – there are a lot more ways for things to progress. Partly this is a function of GM taste and style, but also it’s a function of offscreen narrative. This could probably be a topic entirely of its own, but generally speaking, player failures, success at cost and concessions are all opportunities to advance a track.

A short track communicates imminence, a longer track gives some breathing room. Both are appropriate and there’s no hard or fast rule around length, but there are a few tips.

Assume that 4-6 steps is the “default” number, and shape from there. That means that if you drop a 2 step track on your players, you are declaring that it’s more or less a bomb with a lit fuse3. If, on the other hand, there are 8 or more, then players are unlikely to respond immediately, but it’s going to loom over them over time.

The instinct is that nastier consequences and greater difficulties have longer tracks, and that is true to an extent, but it’s not the whole of the picture. Short tracks with high consequences make great threats and they’re easy to manage. Long tracks for their own sake are more of a problem – making a track long for its own sake runs the risk of turning it into a grind. Since the length of the track is (roughly) the number of times the issue needs to be engaged, feel free to shorten tracks to speed up pacing.

That is, for example, if something is very hard to research there’s a temptation to make the track for resolving it very long. If the research is something happening alongside other play, then awesome. But if it just means “Ugh, another research scene?”, that track is too long.

So, this is just a starter with the idea.  There’s still a lot to unpack, but I wanted to start with the basics of what a track is, so we can start delving into all the things you can do with them