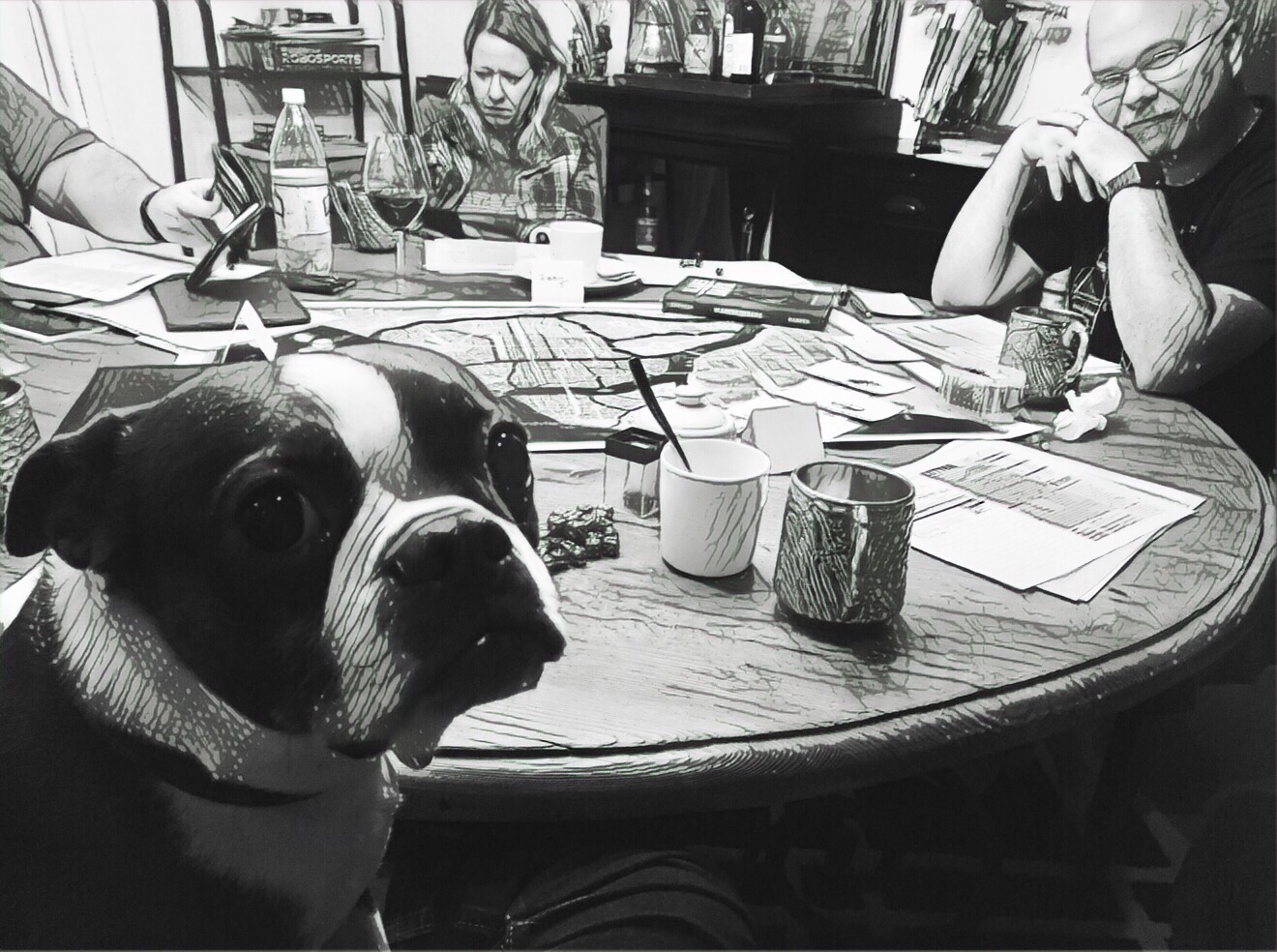 Not to put too fine a point on it, this was a weird session of Blades in the Dark.

First, our Spider had been temporarily shipped out of town, and in his place was a Whisper (Marek, an Iruvian ghost smuggler), so there was a high likelihood that the plans would go a little askew. We also were lacking our Lurk, so subtlety was going to be a challenge.

So, we started with a conversation that had begun at the close of last session, with a demon offering the crew a job (to destroy the reputation of a man who could not die) and very little choice in the matter. We have an 8 tick clock representing his patience which ticks down with every other job we do. So we’ve got that going for us.

For our actual score, we went for a turf grab, or as we liked to call it, “Brand Building”. We identified another small press (The Night Dispatch) that was not doing fantastically well, but had an established masthead, and started looking into how to take it over. After an exceptionally successful gather information roll, our slide befriended the editor and got all the information we needed for us to visit them with enough bad luck that they’d welcome a buyout.

The Whisper & Leech were sent to scare a paper shipment and set it on fire, while the Cutter was sent to break their printer’s hand. The scare-and-fire part went ok, except that it meant that panicked goatees were dragging an inferno through the night market, but that was less our problem than everyone’s problem.

The hand breaking went less smoothly, as this was our moment to discover that our Cutter had no dots in Wreck. Oops. Thankfully, it was a controlled situation, and when it turned into an actual fight, that was well within the Cutter’s wheelhouse.

Still, it all went mostly as intended, the Editor was delighted with our Slide’s offer of help, and we now have a “legit” business with future opportunities for financial shenanigans.

That wrapped up pretty quickly, so we felt like we had time for another score. Now, as the flaming goats were running though Night Market, our greatest regret was that the Leech had not yet completed his portable camera (the long term project he’s been working on since day one) because that would have made for a GREAT photo. So, while the rest of us pursued mundane matters, he finished it up so we’d be ready next time.

For the next score, the simple truth was we needed cash. We had lost money on the last score, and we were going to be eligible for a tier bump soon, so we really needed some dollars, so the discussion turned to ways that we could make fast cash. There were standard crime options, of course, but we now had this camera, and it seemed that should introduce options. Blackmail was considered, but that had some risks. But what if we opted for spectacle? A picture of a momentous event? That could work, but that would require an event.

So, we reasoned, perhaps a picture of an exceptionally cute puppy?

While offered as a bit of a joke, we quickly realized that most dogs in Duskvol are mangy, ratty beasts, so any very cute dog would belong to a rich person. Clearly, we needed to steal the cutest dog in Duskvol. As fun as this might have been, we then realized it might be easier to have the dogs brought to us.

And so the first annual Charterhall Dog Show was born.

What followed was….a little weird. We had just enough social pull to get people to come, though we had to skimp a bit on the location (the university is just so déclassé), and leveraged contacts for the one honest judge (to be outvoted by the other two crooked judges). Oh, and of course our Leech’s bookie showed up and from that point on the fix was in. The ultimate winner was Lady Roz’s Shitzu, but at least one noble left the affair righteously pissed off, so that’s going to come back and bite us.

But, critically, The Night Dispatch had a photo of an INCREDIBLY cute dog, as well as some buzz.

Between entry fees and the gambling, it was a VERY successful score, and between that and everyone going into their pockets (and the Slide diminishing her stash), the crew now has a weak hold on Tier 2. We’ve got some newsies now, and a clear business plan, but we also have some crows coming home to roost, so we’re all expecting a tough tonal change soon.