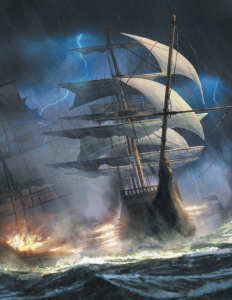 We ran chargen for 7th Sea last night. I don’t have a name for the campaign yet, but we laid a fair amount of groundwork. This is going to be an interesting game, since my tastes usually run to the Musketeer end of things, but the players were explicitly interested in the seafaring route. And I cannot fault them – the rules make it VERY easy to start with a a ship (as it should be).

The characters are pretty fun: We have

We’d all talked a little bit before chargen, but we’d explicitly held off on decisions until we were all at the table, and we walked through the process together. A few observations and notes:

We actually got chargen itself done quickly enough that we had time for a brief tutorial scene. I had a moment of inspiration and realized I could kill to birds with one stone, and also illustrate how the story system worked. I asked everyone to find a skill they wanted one point in (in retrospect, I would have suggested a skill or a 1 point advantage) and have them write up the one-step story necessary to get it. I took those stories and used them to craft a fairly simple scene (a barfight, followed by quickly fleeing town) that incorporated them all, allowing them to try out the rules and see Stories in action. it worked pretty well, and I’d absolutely recommend it for anyone kicking off a game. A few thoughts from running the game:

All in all, we had a good time. First session glitches aplenty, sure, but I think we’re all ready to start up the adventure next session, and I am going home with 4 stories that I can use to build that, which is a nice place to be.