What follows here is going to look very familiar to fans of 13th Age and Everway. I am entirely ok with this.  I note that I am SUPER appreciative that the new 7th Sea is not overrun with NPCs who are much cooler than the players, but there is still a place for NPCs, and that place is making your game more awesome. So with that in mind:

This is an optional rule set designed to help the GM and players add some faces to their version of Thea. it uses the Sorte deck to create a number of iconic roles, then ties those roles to the players and to the setting.

Eventually there will be an official 7th Sea Sorte deck, and it will no doubt offer a great many more face cards to use as Arcana, but until that happens, we’re going to work with the Arcana in the main book, which largely align with the major arcana of a tarot deck.  So when I say ‘deck of cards’, for the moment, I mean an Sorte deck by proxy.  I’ll update this once there’s more to work with.

Select a number of cards equal to one plus twice the number of players (so for 3 players, draw 7 cards). The easiest way to do this is to just randomly draw them, but there is no harm in a little theater at this point – have each player draw one, then have the GM draw a spread of them perhaps. However you accomplish this, this stack of cards is now your story deck.

Step 2: Three Cards Per Player – the good, the bad and the the uncertain

Perform the following step once per player – make a note of the cards they select, shuffle them back into the deck, then proceed to next player. 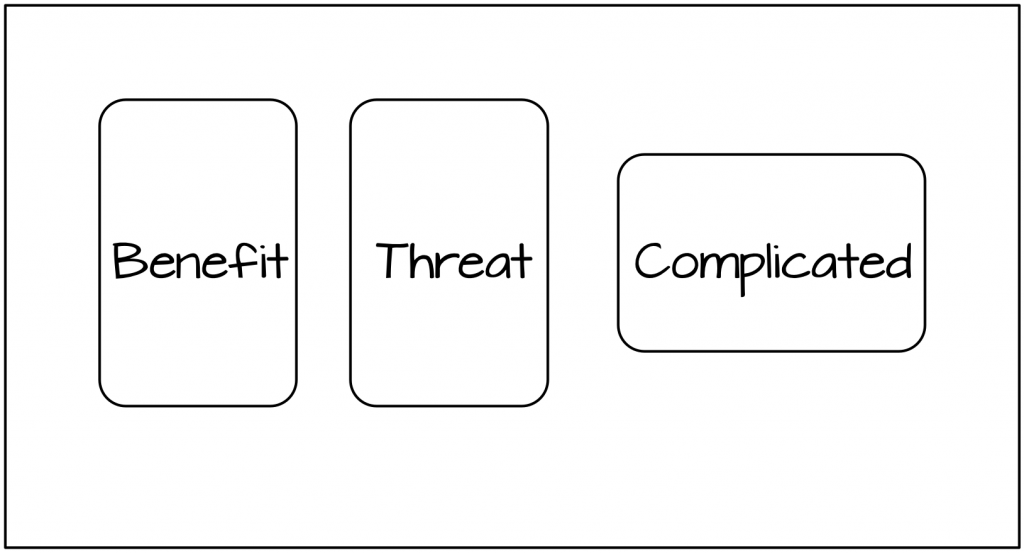 How exactly this happens depends on you and your group, but I’d suggest chosing from the following:

Feel free to mix it up within your group. If one player wants to choose and another wants to let the cards fall where they may, then let them. it won’t hurt. The player also has the option to draw and play any card face down (we trust them not to look). The GM will make note of what card it was, but will not mention it to the player. There is no obligation to do this, but peopel who like awesome thing may want to consider at least one card face down.

For context, the card which is upright represents an ally or patron – someone who is on the Hero’s side. This does not mean they’re an unalloyed good – a meddling parent might fall in this category – but they mostly come down in the hero’s favor.

The card which is inverted represents an enemy or nemesis, someone who works against the hero. It might be a personal vendetta, or it might be that their goals simply conflict with the hero. Whatever their motive, they are interested in the hero in a problematic way.

(Importantly, there is nothing that says an ally is a good guy or an enemy is a villain. Life is a little more complicated than that.)

The card on it’s side is….complicated. The hero’s relationship with this figure is neither good nor bad, but is certainly interesting. Perhaps they are tied to the hero through conflicting ideals (the love the hero, but duty makes them enemies), or by an unknown agenda. Or perhaps they’re related – family is almost always complicated.

Once this has been done for every player, you’ll notice that there will be some overlap between the cards selected, but there is no guarantee that the roles will align. My enemy may be your ally and may be her complicated relationship. That is a good thing.

Now that we’ve assigned these abstract roles, let’s see about putting some flesh on them.

You can ABSOLUTELY invert steps 2 and 3, and if you’re getting player participation in this step then I would even encourage it. However, this step is a little time consuming, so I am technically putting it after step 2 so the GM can do this after the game as needed. But if everyone is into it, then take the time to flesh out the cards first. It very much changes the tone of step 2 (since it’s now about actual characters, not abstract cards) and you might find that preferable.

There’s no catch. The card could be anyone. If you want The Emperor to be L’Empereur of Motaigne, then so be it. Scale doesn’t matter – the only thing that matters is that this character would be interesting in your game. But on the other hand, you are free to make up a character to suit the role – The Emperor in your game might rule the empire of Motaigne, but in another game, he may be One Eyed Dougal, the kingpin of crime in Carleon. In both cases he is a powerful, arrogant but commanding figure with great resources at his disposal, the difference is which be your game is going to see a lot of.

But there’s a further trick – you shape your game with the cards you select. If you decide to assign L’Empereur to The Devil, or even The Lovers, you are making some pretty explicit (and pretty cool) changes to some of the assumptions people might have going into it.

Some of these are roles rather than names – this is intentional, both to support future products and to allow you to fill them in on your own. Also, some of these are SUPER on the nose, but if it is subtlety you seek, that princess is in another castle.

Making Your Own Faces

The default deck is very universal, touching all parts of Theah (though it’s light on Pirates). You should absolutely treat it as a starting point, and customize it to suit your campaign. Specifically, if there are things you aren’t interested in, then remove them from the deck! If your game is never going to touch Ussura, then you absolutely need a new Magician and Witch. I am only using the characters from the book because they’re a common touch point – they should absolutely be tweaked to your game.

Some players may have opted to play some of their reading face down, so they explicitly don’t know who is in that role for them. That’s straightforward enough. The next question is whether you want to keep any more of the deck hidden from them, or more specifically, keep hidden from them what characters are tied to the cards in the deck.

I would only suggest doing this with the enthusiastic buy in from your players. Secrets are not intrinsically bad, but they’re not intrinsically good either – they’re only useful insofar as they drive fun or exciting reveals. If your players want to be surprised, then don’t deprive them of that. But if they’d rather have the full picture (to better equip them for writing their own stories), then you should support that.

Step 4: Using the deck and readings in play

It would be entirely possible to come up with some baroque system whereby the elements coming into play from a character’s reading impact their hero point generation or give them a benefit on shortening stories or otherwise have some sort of mechanical hook. But doing so would rather miss the point. The purpose of this system is not to drive mechanics, but rather to attach some faces to the setting in a way that ties them directly to players.

For players, the reading is mostly informational. Notably, it gives them explicit permission to write anyone in their readings into their stories, but create no obligation to do so.

For the GM…well, there are LOTS of tricks.

First and foremost, this has just created a vast trove of useful passive information that you can use to make your game more awesome. You could never touch the cards again and still reap great benefits from this approach. But why stop there?

You now have a great tool for answering questions on the fly. Found yourself up against a wall looking for a twist to keep your players interested? Flip the next card and behold the secret mastermind about to be revealed! Sure, maybe it won’t make much sense, but it’ll get you thinking in new ways, and you’ll find that can be a great way out of a jam.

You also have a tool for crafting stories. You can cast fortunes with the deck you created for this game, and take them as inspiration for a story. There are lots of potential spreads, so I’m going to illustrate two simple ones.

First, you can mirror the player’s spread – 2 cards, then one card sideways. The first card is the past, the second card is the present, the third card is the thing in balance. What that means is up to you, but you already have people and a relationship – odds are good you can lay some meat on those bones.

Second, you could go for a fancier 6 card spread. You can either cast this yourself (reveal them in order) or do it with the players to see what it gets them thinking. You can just do this generically, but if you start with a very clear question, it makes things work much better The six cards, arranged according to the illustrations are: 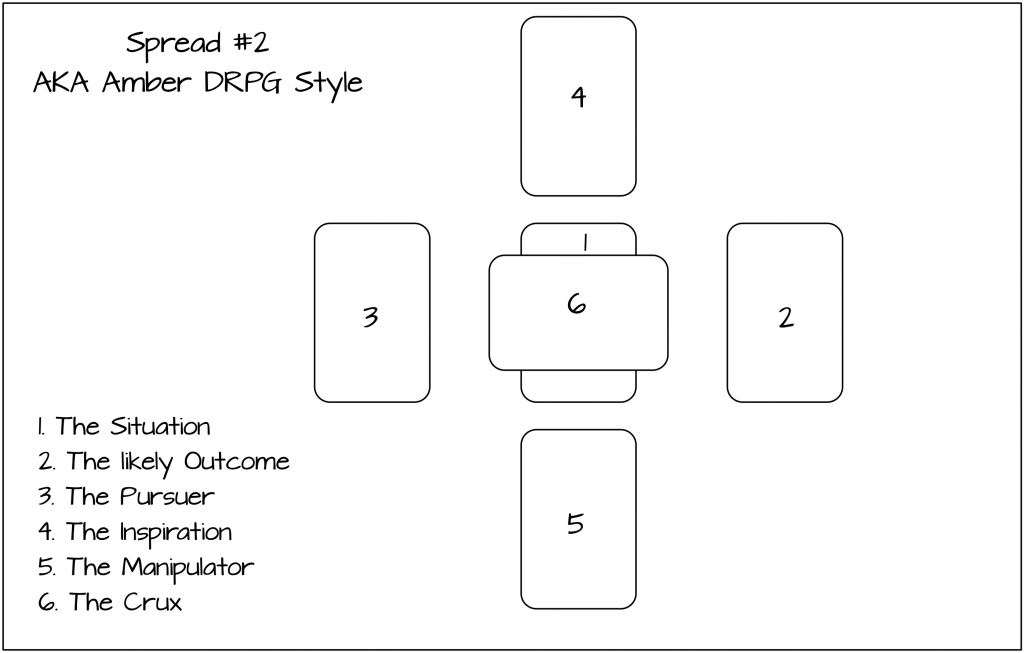 GM Tip: People can be bigger than themselves. If the cards suggest that L’Empereur is present, he need not show up personally. Someone in his sphere of influence, like a musketeer or spy

Even if you forgo any other use, consider just doing the following – flip three cards at the start of any session and leave them out as threat and promise.  You’re not obliged to touch upon any of those three in play, but you will be reminded that you can.

Step 5: As the World Changes

Players are free to change their readings between sessions as their story evolves. No Problem.

If a card needs to be retired (say, if the person it’s linked to is killed), then that card gets shuffled back into the main deck, and a new card is drawn and placed in the story deck. It’s given a new face, and players may update

If you absolutely must have some mechanics, consider the following.