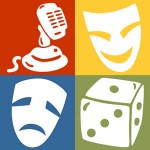 So, a little while back, Luke Crane was on an episode of Narrative Control where he – being Luke – said some controversial things.  Those things touched on Fate and Apocalypse World, so Sean invited me and Vincent Baker on to talk and sort of respond. It was fun. Sean is always awesome, and Vincent is genuinely one of the nicest guys in gaming. The episode has been posted, and you can listen here if you have ever been interested in hearing my sinister laugh (ok, not really).

That said, I’m going to call out something that I let pass during the podcast because it would have been a total sidetrack.  To Vincent’s mind, 2d6 + value vs target is the most obvious dice mechanic, with rolling d6s and counting 50% successes as the second most obvious.  I respect his opinion, and they’re both solid dice mechanics, but I say poppycock. For a couple of reasons.

First, the obviousness of any die mechanic that is not “read the value on the dice” is pretty damn spurious.  Some mechanics may be easier to learn or simpler, but that is horse of a different color.

Second, if there is a natural die language, it is hugely user variable.  To me, there is no die mechanic more obvious than that used by Risus – roll some dice and add them up. More dice are better.  I feel like it’s very nearly perfect.  But for some the idea is utterly repellant.  If you’ve played a lot of other games, Feng Shui’s dice mechanic (d6 – d6) is “weird” but that’s the force of habit.  Hell, it is only time which has made D&D’s polyhedrons “not weird” to a lot of us.

Vincent is a genius. One of the greats. And he should absolutely design to his intuition.  But don’t feel bound to it.

PS – I’m not even going to pretend that Fudge/Fate dice are intuitive.  I could make the case that the actual die roll itself is pretty grokkable, but the ladder is something you learn, for better or for worse.