Once we had characters created, we did a quick round of connections to establish a little bit of backstory between the characters.

First we sketched out a shared adventure. Collapsing ice, emerging Giant spiders, fighting the spiders, exploring the revealed ruin. very loosely sketched, but it now gives something concrete to throw flashbacks at in the future.

Next, I just assigned everyone a number, rolled a die twice, then flipped up a Paizo plot twist card (from the flashbacks set – yes, this is turning into a little bit of an ad for Paizo’s cards). I pretty much just did this until almost everyone had at least two, then did a quick one for the remaining 3 people. 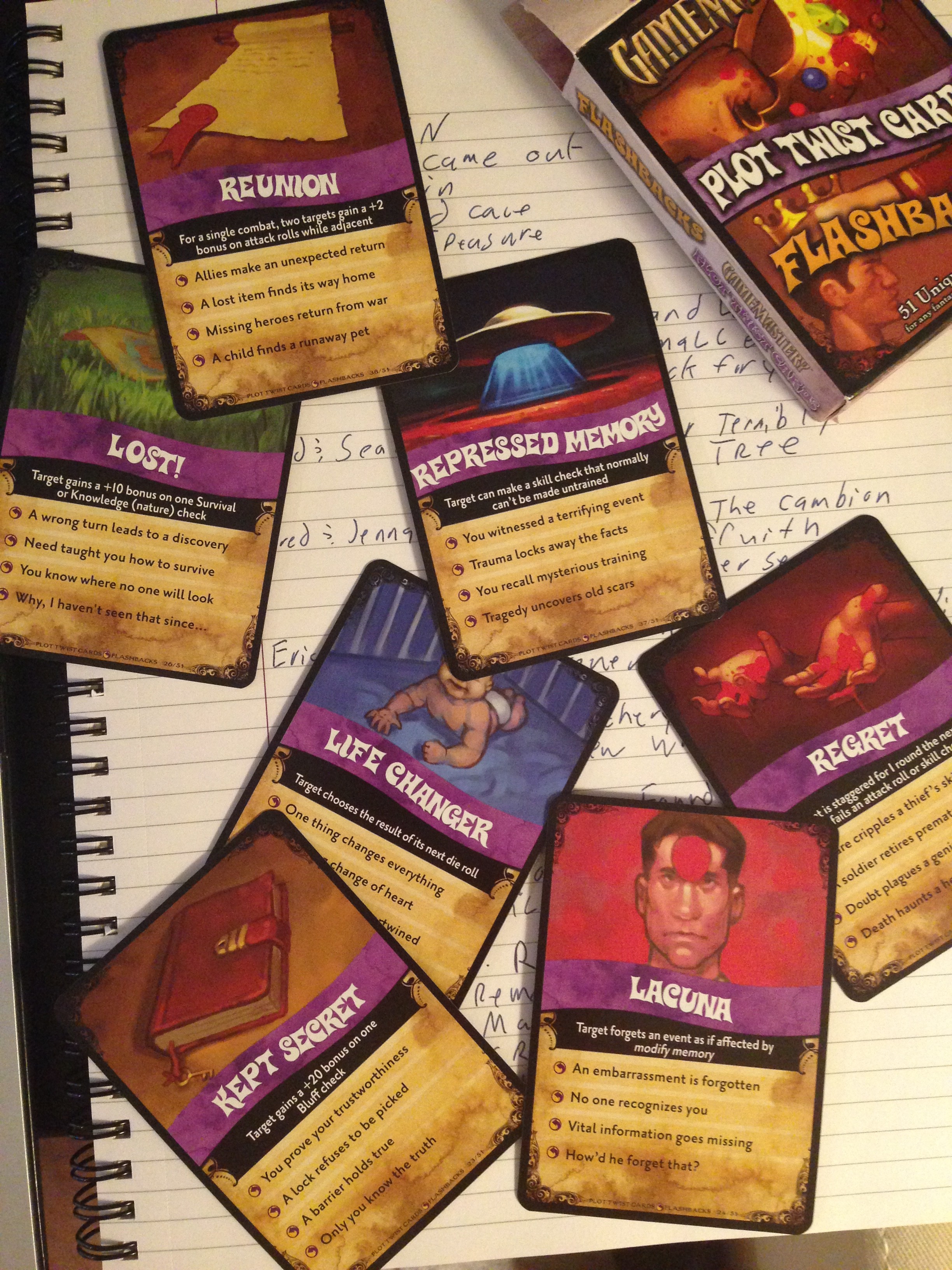 Naoto & Tuak drew “Lost”, so we talked about how they had gotten seperated in the dungeon and got Lost together. Because Tuak is kind of a jerk, we decided that they got to a point where a halfling could get out. Naoto did, but came back for Tuak. Without payment even!

Glimmer & Treewind drew “Life Changer”. The card has the image of a newborn on it, so we went literal, and in the midst of the ice spider attack, they delivered a baby despite having no idea what they were doing. Glemmer managed to fake it, but Treewind got the credit, and the baby’s name was Tree.

Glemmer & Arasthel drew kept secret, so we zeroed in on the Fire sister. Glemmer knows he Cambion she was with, and remarked to the investigating Arasthel that she didn’t seem kidnapped. Arasthel asserted she was charmed, but Glemmer knows she’s lying, and she knows he knows, so they have this little shared secret.

Naoto & Israfil drew Lacunsa(Memory), so we talked about the way they met, and decided that Naoto was the one who had opened the watchtower and released Israfil. They share the secret of the watchtower’s location.

Kit & Arasthel drew “reunion”, so Kit had visited the wood elf kingdoms in her youth, and had learned the basics from Arasthel.

Israfil & Glemmer drew “repressed memory”, which was kind of a weird one, so we decided that Glemmer had found the watchtower as well, but failed to open it (possibly because he’s not particularly pure of heart). However, that added Glemmer to Israfil’s sleeping awareness, so he dreamed of Glemmer’s defeat of the sleeper, though he doesn’t fully recall or understand that.

For the last one, Kit, Tuak & Treewind drew “Regret”, which ended up being a little bit tricky, since Kit is LG, and Tuak and Treewind are N and CN respectively, so moral regret was a little hard to come by. So it turned out they had cost the town something – they were attacked by a Rehemoraz, which would pretty much chew them up and spit them out. They were saved by Marshall Atwood, the hero/lawman of the town, but in doing so, Atwood was horrifically injured and crippled. Kit feels horribly responsible and Tuak and Treewind feel horrible that other people blame them for it.

And that is where we left it. If people had not needed to get home, then I suspect we would have insisted on starting play right then, which is (I think) a good sign.