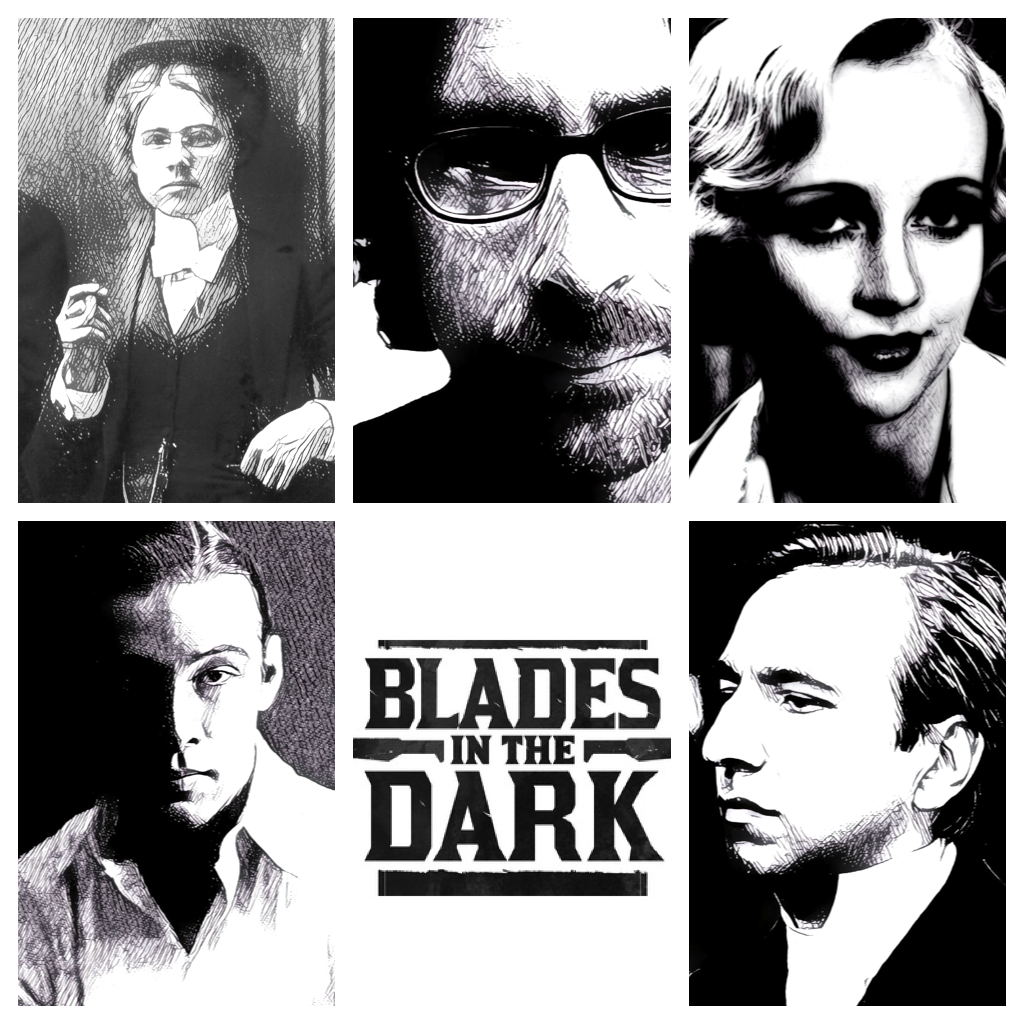 This was our first full session, and we pick up a guest: our lurk, Rudy, was the shady son of nobility and college dropout. As a refresher, the other characters are:

We decided what we needed was some juicy gossip, which is slightly odd thing to run a heist for, so we opted to break into a high class party being held by one of the magistrates and spike the punch so as to insure that there be matters worth gossiping about.

Spiking the punch was more of an option because it turns out we’re lacing our ink with a narcotic. This is something that came from the GM to forcibly introduce a more clearly illegal act into our crew because many of the games assumptions rely on that. More on that in the post-mortem, but in the short term half the crew (Luca and Jack) know about this, so they already had drugs well on hand.

Achilles, Izzya and Rudy were able to finagle invites to the party, and arrangements were made to get Jack and Luca got jobs in the kitchen. While the party goers mingled, Luca spilled the punch to arrange for a refill and Jack spiked it from a hidden bladder-and-hose device. Or that was the theory – the dice did not favor us. Luca was confronted by one of the actual maids and had to lean on the staff’s racism (flash back to Achilles and Luca doing a session on how to play on stereotypes) and Jack’s device sprung a leak, insuring that he was also profoundly dosed.

Meanwhile, the partygoers were orbiting around Lady Drake, the magistrate. It was well know that she was dirty, accepting bribes in return for skewed sentences, and the attendees were largely of middling importance, with enough noteworthies that the possibility of scandal was entirely in play. Additionally, this was exactly the sort of event to provide cover for a bribe, so this night had the potential of a twofer.

Rudy took point on social mingling, taking advantage of his aunt speaking with Lady Drake to insert himself flirtatiously into the conversation, though in doing so he snubbed an older gentleman who had been clearly courting the lady.

Rudy remained in orbit around Lady Drake while Luca approached the gentleman, hoping to take advantage of his agitated case and…the dice were not kind. He took grave offense, and called the house staff (the maid who had chewed her out earlier) and demanded that Luca be sacked, thrashed and forcibly ejected.

Luca made a scene as she was dragged into the kitchen, including pleas that the gentleman be kind for the sake of their child which she was carrying, which served only to enrage him further (this got us some news, but also started a clock on this guy’s rage).

In the kitchen, when a maid was sent for the switch, Jack drugged the handle so the head maid was paralyzed once she took it up, whereupon Luca delivered a very scientific beating indeed before exiting out the back in order to scale the building and await upstairs.

Meanwhile, Izzy had done some legal research and had a good sense of who was likely to be visiting the party in order to pay a bribe, and had identified a manure importer as the likely candidate. Sure enough, after the party had reached a certain pitch, Lady Drake and the importer headed upstairs, and the crew moved to follow – unsuccessfully. Our first attempt to use the group actions did not go so well, and further raised suspicions against the crew. Thankfully, Luca was already upstairs and saw the exchange, though regrettably she did not get to see where Lady Drake kept her records.

There was a temptation to push on and try to get those records, but the pick pocketing attempt to get the bribe from Lady Drake was so close to disastrous (though ultimately successful) that the crew felt that their luck could only be pushed so much further, so they split, armed with two headlines.

In the aftermath of the job, the crew sold a great many penny sheets, but Jack’s lips were a little too loose while celebrating, so the heat was all the worse. Achilles assisted in mitigating the heat, but was himself swept away by family obligations and ended the session on the train to Severos. Most troublingly, at the very end of the session, the remaining crew members were joined by a smiling “man” who creaked like rust when he walked and was likely the point of the demonic notice the crew had just picked up.

Good session, all in all, and a great deal of fun was had, but it did illustrate that our chosen path of crime is slightly tricky to map to the mode of the game. Playing it even a little, it is clear how smoothly things would work if we had more concrete objectives, so we may need to figure out how to make the essence of our stories concrete.

We also have the problem that at the moment we’re pretty shady, but not profoundly criminal. We all bought into the idea of the crew evolving into a newspaper from somewhat more pamphleteer-y roots, and that’s consistent with the mechanics – we’ll have a little more tier and a few more resources before we get political – but that means these early tiers are at a bit of a mismatch with general thrust of the game. I’m not sure it’s insurmountable – even with our moderately good intentions we seem to get in plenty of trouble – but the transition is going to be interesting.

One curious takeaway I’m getting from this is that I wonder if we over-prepared. That is, I wonder if it was to our detriment to have a motivation beyond greed at the outset. Not because Blades does not support a wider range of motives, but because I think it maybe treat greed as the on ramp. If you start with a crew that is nothing but quick sketches and empty pockets, the first few jobs will start fleshing out friends and enemies (mostly enemies) and provide the kind of infrastructure to them build upon. Pretty slick if so, but it leaves some gaps. I’ll have to think about it a little bit.

Oh, and one way or another we’re going to have a new crewmemebr next session – with Achilles out of town due to a bad vice roll, there will need to be someone new to step into the gap!