First and foremost, I want to make something clear: this is an idea from John Harper’s Blades in the Dark, the clock mechanic, which I am adapting to 7th Sea. I take zero credit for any of this, and all blame for it’s awkwardness. I absolutely encourage looking to the source material for further insight.

With that in mind, here we go.

When the GM encounters a situation which requires a little bit more range than a simple yes or no, then she can do the following:

Sounds simple, because it is. Consider this example: 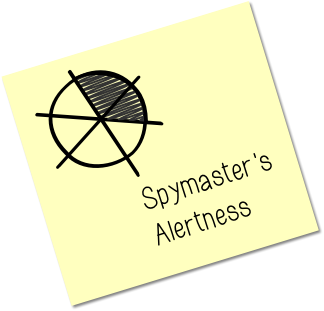 We’ve done two suspicious things, but so far he hasn’t caught on

Players are guests in the court of Elaine, but are also secretly spying for Montaigne. Elaine’s spymaster is on the alert, but not yet suspicious.

The GM draws a 6 wedge wheel to represent the awareness of the spymaster. When the heroes do things that might raise suspicion (even if it does not point directly at them), the GM fills in a wedge. On individual rolls, the GM may offer the prospect of filling in wedges as potential consequences that need to be offset. If the wheel ever fills in, the Spymaster realizes that there are spies around and the whole palace goes into lockdown.)

This offers a few interesting tools to the table1:

Anyway, I offer this as a convenience for anyone looking to solve the same problems I intend to use it for.

16 thoughts on “The Captain’s Wheel”