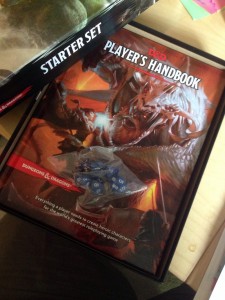 WOTC just made a very big announcement –  they have released the D&D 5e rules under the OGL and also announced a program that allows fans and small publishers to use WOTC content. This is a HUGE deal for many reasons, and something I’m personally very excited about. It’s also a big, complex ball of an issue, so let me talk through it a bit. Some of this will be familiar material to OGL veterans, but I want to make sure to hit the basics.

WOTC has released a 5E SRD under the OGL.  Enough acronyms for you?  Let me unpack that in english.

Wizards of the Coast has published a System Reference Document (SRD) containing an abbreviated version of the 5e D&D rules.   That document contains the Open Gaming License, which means that most of the document (with clearly delineated exceptions)  can be used freely as long as the terms of the license are followed. Importantly, this is the same OGL that the 3e D&D material used, along with many other games, including Fate!

Well, I do for one!  This means that people will be able to create their own 5e compatible products (so long as their respectful of WOTC’s IP) for their own entertainment or for sale.  The 3e OGL spawned a number of brilliant games, and there’s no reason the 5e one can’t do the same.

So, is this a money train?

Weeeeeeeellllll, it probably will be for somebody, but be careful.  If you’ve ever heard the term “d20 glut”, it referenced the tsunami of d20/OGL products that hit the market after the 3e OGL was released. Some folks definitely made a lot of money off it, but it also did a lot of harm. Customers and dealers have grown wary, so it is not going to be worth spamming throwaway products, especially because that is where the most competition will be found.

It *is* an opportunity though, if you are willing to put in the time and do the work. A number of companies that are doing very well today did so by building a solid foundation of quality products during the glut. If you are looking for your 5-10 years to overnight success, this is not  a bad entry point.

So What’s the Catch?

There is a lot of stuff that’s *not* under the OGL.  The SRD is the bare minimum of the 5e rules to provide a framework. For example, for classes, it includes only one subclass. The expectation is that the OGL may be used to add new subclasses, not muck around with existing ones.  it is a reference for design, not to provide you a way to get out off buying a Player’s Handbook.

It also is explicitly not D&D or d20. You can make something under the OGL, but you don’t get to use those terms. You also don’t get to use anything that belongs to WOTC, including certain monsters and their settings, like the Forgotten Realms.  If you’ve used the OGL before, these are familiar limitations, though we’re still combing through the doc for edge cases.

Why Would I Use This?

This is very exciting and valuable if:

But if you want to hew a little closer to D&D, there is another option:

The Dungeon Master’s Guild is a storefront, but it’s also an idea. Under this model, you may write material that uses any of the 5e rules as well as material explicitly shared by WOTC (check the content guidelines for specifics). Notably, the shared material at the moment encompasses the Forgotten Realms, and there’s every indication that if this is successful, it may expand to include other material (like Eberron, Planescape, Dragonlance or what have you).

Material you write this way is upload to and sold through the DM’s Guild storefront, which is in partnership with Drivethru. Charge whatever you want, and keep 50%. The other 50% is split between Drivethru and WOTC.  That may sound steep, but Drivethru normally takes 30-35%, so an additional 15-20% for WOTC is a pretty good deal considering what you get, especially if the material that WOTC has put up on the site is any indication.

So I can just sell my own D&D Stuff?

Pretty much, yep.  As long as you’re willing to do it there.

This seems like a total win. Why wouldn’t I use this?

Well, it kind of is a big win.  If you want to put up a character class, publish your own adventure, write fiction in the realms (I’m pretty sure you can do that) or otherwise just write the 5e Material you think the market needs, the only real downside is that there will be a lot of competition for eyeballs, but that will be offset by the fact that a lot of traffic will be pulled to the storefront.   It’s also a somewhat self-perpetuating audience. The folks posting are also the folks buying, especially since the barrier to publishing is now exquisitely low. And as far as I can tell (IANAL) the arrangement is super respectful of your intellectual property.

The only reason I can think of not to go this route is if you want to distribute your material somewhere else. There are plenty of reasons why that might be so (promoting your own brand, doing non D&D stuff, or if you’re just releasing stuff for free somewhere.

Now, caveat – I’ll probably be doing OGL because I am already comfortable with it, and I am fearful of the noise level at DM’s Guild. But I have that luxury.

So What Does This All Mean

This is a big deal for a couple of reasons.  The OGL opens a door to a lot of new and interesting game technology, and it’s the part i’m most excited about.  But the DM’s Guild is the really fascinating part of this to me, for a number of reasons.

There are a few concerns and questions

It is going to be at least a year before we see how this really shakes out, but I for one am excited, and I intend to dive into the OGL and crank out some material.