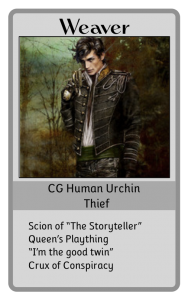 We had one new player, so we opened up with another round of chargen. We now have Weaver, a CG urchin turned thief whose background got delightfully complicated by the spread. Initially, he had run with a gang which has become a church (or cult) to “The Storyteller” with his one remaining childhood friend as the high priestess. He left the imperial capital because while he believes in the Storyteller, things were getting weird.

But then the Past card came up The Bear (really, the dancing bear) and it evolved from that the Queen (the emperor’s daughter) had been taken by his stories and made something of a pet of him. This had many upsides, but also was full of problems as he blamed the imperials for the loss of many of his childhood friends. He also stole a book of unknown provenance during the wyvern attack.

And that’s when we flipped the present, and it came up The Twin, inverted. We described a few possible interpretations, and opted for something literal – while Weaver was uncomfortable with his growing prominence in the cult and the court, someone else saw it as an opportunity, and the final problems that drove him from the city were engineered by a changeling, who has since taken his place.

And when the future came up  The Empty Throne (curiously, also Arasthel’s future) it became pretty clear that Weaver’s role in this changeling plot is far from over.

We then pulled together some backgrounds. It turns out Weaver was the guy who recognized Hazlam, and who was persuaded to keep it to himself by Hazlam and Israfil. It also turned out that Weaver had a hand in the activation of Tuesday – the stolen book is actually full of warforged lore, and Sul Taeres’s ‘accidental’ activation of Tuesday was quite intentional on their part (albeit with a limited understanding). Taeres and Weaver have absolutely fallen together as partners in crime, and I’m pretty happy with that.

All of which lead to session start. We had 8 players, and while it’s more manageable than 10, it was still enough that it created some problems. Not enough to tank the game, but definitely enough to muddle some things.

Since everyone was up to speed on rules, we had a little bit more opportunity to build out the setting, so things began in the Smokey Yak with Lefty telling a story of how the ice came to be. The Yak is the tavern that grew up next to the smokehouse, since it was one of the central locations in town, and Lefty got his name when something (the story changes) took off his right hand in one bite. It is a running joke among trappers that when they gut a creature, they’re looking for Lefty’s ring.

The story went that when the armies of darkness rose up, the Gods could not stop them, and the Titans were deaf to the pleas of mortals. But when those armies grew bold enough to challenge the heavens, that was enough to interest Dogan the Devourer, who relished the battle and laid waste to the enemy, but also to the world. So great was the devastation of this that two of the kinder hearted Titans intervene. Fafnir the great ate up the enemies challenging Dogan, and Tetra froze the world, sending Dogan to sleep beneath the ice. And to this day, at the very center of the ice, he sleeps, and woe be on us all if the thaw ever reaches him.

But, of course, that’s just a story. Tuesday noticed the proprietor was looking concerned about something, and checking outside regularly. Uncertain how to address this, she grabbed some other characters to go talk with her. It turned out that her cousin should have been here already with the yak herd. A trivial concern in most places, but Placeholder is incredibly dependent on the herds for its food supply (since it is at a remove from any substantial agriculture). They players agrred to investigate.

Sadly, this was complicated somewhat by Glemmer, Taere’s and Weaver putting on a show inside, a purse getting stolen, and a very large, angry man pursuing Weaver out the window and onto Hazlam’s sled. Hazlam & Weaver took off as Naoto attempted to get the man to stand down and got kicked for her trouble. She took it poorly, drew steel and violence ensued.

Now, this was education on a few axes. First. I dropped the ball as GM in making it clear what was happening where. We had a lot of characters in different places, and I hadn’t made it clear enough what was going on where.

Second, the dice were unkind. The guy got initiative, got two attacks off, hit on the first, critted on the second and dropped Naoto in one round. That was, frankly, not a super satisfying outcome. Now in fairness, I had intentionally statted the guy as tough because I figured he might become a recurring NPC, and if he was tough now, then surpassing him later would be satisfying. I had not, however, expected things to be quite that lopsided. Put a pin in that, it comes up later.

The NPC ended up getting a name (Gaston) and stormed off to find Weaver, so he didn’t notice the group stealing his wagon to go catch up in the other direction.

The group met up, headed out along the trail and found a dead yak and clear sign of an attack (distance was about one long rest, so Naoto recovered in the wagon). Clearly the attack was made by some burrowing creature, and the herd had been lead off the road towards rocky terrain. Also, there were signs that someone had been watching the fight. The group followed and were within sight of the rocky outcropping where the herd and herder had sought refuge when they were attacked by the young Remorhaz.

Now, again, this was educational. The worm is a CR 5 encounter, and it’s mostly made nasty by its ambient damage (7 points when you hit it[1]) and the fact that it shrugs off cold and fire damage. It also had a lot of Hit Points, but an only OK armor class. Balanced against this, the party was operating short handed, since some took off in pursuit of the observer, who was watching from a hilltop abut a quarter mile off.

For all this, the deciding factor ended up being luck – the worm could not roll for crap, and landed only one hit in the entirety of the fight, though despite that, the party was pretty roughed up by the ongoing damage. The observer got away (he had plenty of time to do so), though he left a little bit of evidence (tobacco ash) and the party took a short rest with the herd before deciding to lead it back to town, expecting to rest along the way.

Naturally, they got attacked while camped. I tuned the encounter a bit more this time, with one CR4 Shadow Demon and 3 CR2 Ice Gargoyles (regular gargoyles, but vulnerable to fire). While not super dangerous toe to toe, the demon wound have the advantage of surprise, and the Gargoyles were not intended as a threat to the players, but rather, to the herd.

I’m actually pretty happy with how this fight went. The demon one shotted Tuesday (a surprise to me – turned out she’d been conservative with her recovery dice during the short rest) and there was a brief stealth duel with Weaver until the thing was revealed enough for Israfil to go full Paladin on its ass, backed up by the party clerics. A lot of radiant damage makes for a very dead Shadow Demon.

The rest of the party dealt with the gargoyles,and a Gust of Wind kept them from damaging the Yaks as much as they intended, buying time for fire and ass kicking to do their job. The fight definitely got pretty straightforward once the party could bring their strengths to bear. I could certainly have made it harder, but I think it felt about right.

They got back to town with the herd, and Gaston was bought off with the meat from the one yak the gargoyles had killed and by being given credit towards the Remorhaz kill (the head went up by the gates). We still had some time so there was some investigation that followed. The town, it seemed, had been having a lot of supply problems. Nothing too overt, but enough that everything was running low, and the yak herd going missing would have potentially been quite disruptive. No headway on who the mysterious smoker was, but it did put Lucius Tanner (owner of the town’s largest trading post) on their radar as the likely source of the tobacco. He’s also a potential suspect as someone who benefits from scarcity. The problem is that Lucius is making money hand over fist, and disruption might hurt that.

Out heroes’ acclaim for besting the Remorhaz also got them attention from the Aide to the Marjan ambassador, who needed someone to drive some claim jumpers off his recently acquired claim. At first, the group thought he was a potential mark, but then after spotting his bodyguard, wondered if he was a honeypot. After Sul Taeres agreed to help, Arasthel stpped in and insisted they needed some time. The diplomat seemed put off, and pointed out that they had been discussing this for several hours already, and if they were adamant (they were) he woudl seek elsewhere.

So the the diplomat hired Gaston and his crew, and set off. The party was still curious, and investigation seemed to suggest that if the diplomat was not on the level, then at least his con was much deeper than just ripping off a few adventurers (the Marjans had bought out numerous contiguous claims since the accord was signed, greatly overpaying in almost all cases). The set out (for a number of sometimes conflicting reasons) only to encounter a badly injured Gaston and crew on the road coming back. They’d been ambushed by undead halflings. A negotiation was made with the Marjan diplomat, and the job of clearing out these apparent claim jumpers is now theirs again.

Ok, numerous takeaways from this one