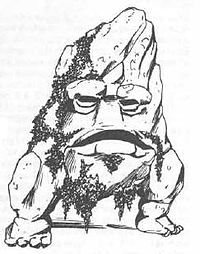 Galeb Duhr – This is another creature I have an unreasonable fondness for, since i remember getting a deck of monster cards when I was quite young. It included this guy, and I had no idea what it was. For the unfamiliar, it’s basically a walking boulder who can animate other rocks to fight. It’s a straightforward bruiser with the ability to call allies and a fun charge attack, but the lore suggests that it also makes for an interesting NPC – they’re neutral by nature, but are often guardians of things. There’s an interesting tidbit to them in that they’re elementals, but their native plane is the Prime Material. Curious implications there.

Gargoyle – A classic, including resistance to non-magical (or non adamantine) weapons, makes for a nasty low level (cr 2) threat that scales up as minions. The main color is kind of dull – they look like statues and are evil. Not exactly news. That said, there’s a nice sidebar about how they’re created on the elemental plane of earth as evil mockeries of (and weapons against) the Aarakocra, which is the nice start of something.

Genies -Dao, Djinni, Efreet and Marid – they’re not quite the classic 4, since originally it was just Djinn and Efreet, but the Dao and Marid filled in the rest of the elements well. These are the intelligent, powerful elementals, so I was super curious what their lore had to say.

They’re rare and haughty, which comes from “the knowledge that few creatures except gods and other genies can challenge their power”. This seems pretty bold for what are CR 11 creatures, but maybe they meant collectively. Genies are apparently created when the soul of a sentient creature melds with the appropriate elemental plane. This is rare and, importantly, leaves no trace of the original soul, so that’s another weird bit.

Genies are all slavers, which makes sense for the Dao and Efreet, but seems odd for the chaotic good djinn and even the chaotic neutral marids. Ah, and apparently there are noble genies, who I presume are tougher than CR 11, so that’s something.

The individual entries give some RP tips (apparently the Djinn are very nice slavers) but nothing exciting until you get to the Marid who not only sound delightfully self-aggrandizing, but who also have a picture that desperately makes me wish Diterlizzi had come back for it.

Ghost – This one intrigued me because the ghost is almost archetypical as a creature that I want to know how to run more than I care about specific stats. This entry did not let me down, starting with the key fact that ghosts can be any alignment and are looking to resolve unfinished business, not just running around being evilly undead. The abilities allow ghosts to be terrifying and to possess people, as well as to go ethereal. All in all, this was pretty much what I wanted (An I imagine a legendary ghost would have rather more “haunting” effects)

Ghouls – Nice bit of lore tying them to Orcus and explaining why elves are immune to their paralyzing touch. Probably just as well that ghasts are presented here too as souped up ghouls rather than a separate thing. These are a classic (they’re in one of the first examples of play I ever read) and they seem done right.

Giants – This is another lore chunk, explicitly calling out that giants are almost but not quite as old as dragons, and (as noted in the Behir entry) they warred in the past. Giants apparently have a rigid pecking order both across and within types (and the greatest hill giant is still less than the least Fire giant).

Each giant type gets a fair amount of copy, and it’s well used. It gives plenty of context to work each type (cloud, Fire, Frost, Stone, Hill and Storm) into the world. Each has a fun hook – Cloud Giants are made to be villains. Fire Giants are disciplined brutes. Frost Giants are wild brutes, too good to craft. Hill Giants are stupid bullies. Storm Giants are distant prophet kings.

Stone Giants are possibly my favorite. They’re seers and dreamers. To them, the world outside is, effectively, a dream, and they behave in accordance with this. Just a fun piece of color.

Stat wise, they run the gamut from CR 5 (Hill) to 13 (Storm), almost as if they’re perfectly designed to match middle tier progressions heroes.

Gibbering Mouther – Seriously yuck. I mean, the thing is gross and unpleasant, with a gibbering that can make you mad, but is also just makes the terrain around it doughy as it warps and infects reality. CR 2 is lower than I would have expected, but I guess it’s not particularly tough or strong, it’s just profoundly unpleasant.

Gith – Another fun one whose lore I was looking forward to, I found it interesting that they opted to make it one entry. It totally makes sense, and I like it a lot, since it really underscores that the Githyanki and Githzerai are divided by culture, not biology. The joined history is tidily summarized.

The Githyanki are detailed first, and there’s some nice attention to detail. That they raid worlds throughout the multiverse is nice and vivid, but practical notes like the fact that they always leave enough to rebuild (so they can reaide later) makes it feel much more dynamic and organic. The inclusion of the silver swords is a welcome touch. There’s also a nice note about their outposts in the material plane where they raise their young (because nothing ages in the Astral plane).

The Githzerai lore is nothing new to old nerds, but it provides a nice excuse to elaborate a little on the nature of limbo (the outer plane of roiling chaos that the githzerai exercise their will upon) Unfortunately, it’s a bit static – the image of the fortress-monasteries in the wilds of the chaos is a vivid one, but there’s not much reason to seek them out, though this is slightly addressed by the note that sometimes a githzerai will start a monastery on the prime material plane to spread their teachings. Githzerai parties hunting illithid are also a potential point of overlap.

Two stat blocks for each – a Githyanki warrior and knight, and a Githzerai Monk and Zerth. They have innate spellcasting noted as psionics. The Githyanki knight has a silver sword which, on a crit, can sever the silver cord, as it should.

Gnolls – I was curious about this one. D&D has a lot of evil humanoids, mostly out of tradition and to provide variety in the occupants of 20 by 20 rooms. Given that, how do you make them stand out? 4e addressed this by giving each race a tactical gimmick that made their fights feel different. 5e can’t lean on that, so in this brave new world, can you make gnolls interesting? Well, kind of.

In an interesting turn, apparently yeenoghu created them in his image, rather than the other way around. But the upshot of this is that they’re basically crazed, mad and evil all the time. They are basically the Reavers from Firefly.  As I think about it, they’d be kind of cooler if it were framed that way in the text, and form this point on, that is probably how I’ll use them.

The real saving grace is the Gnoll Fang of Yeenoghu, the most badass of gnolls, blessed by Yeenoghu. In addition to being tough (CR 4) they have abilities which can drastically increase the local gnoll population, making them a load bearing boss of sorts. That’s a good hook, one I can work with.

Gnome, Deep (Svirfneblin) – So, I get why the Dueregar got skipped over as race option – the enlarge ability is a bit potent – but these guys are pretty much by the numbers – a little bit of cultural lore, a little bit of spellcasting, poisoned weapons, that’s about it. I suspect the only reason they were left out of the PHB was space (and to keep the dueregar from feeling bad). It does occur to me that the fact that almost every underdark race uses poison meshes curiously with the Dwarven ability to shrug off poison.  Filing that away.

Goblins – Technically, I could ask the same questions about goblins that I do about gnolls, but I consider goblins essential, so I don’t. The lore is what you would expect – they’re goblins – but there’s a very nice touch about the Goblins dreading the prospect of being called up by their god in death. Stat block is pretty simple (their gimmick is the ability to disenage) but that’s pretty much what you would expect.

Golems – Golems are in interesting challenge as an entry – because they’re constructed, they have a certain amount of plot value for their creation in addition to their combat value. The creation part gets kind of short shrift since it’s punted to the Manual of Golems in the DMG. That leaves the actual fighty bits, and they’re pretty darn solid for that. Flesh golems weigh in at CR 5, Clay at 9, stone at 10 and Iron at 16. All of them rare resistant to non-magic weapons have a host of immunities. . [1]

Edit: they’re actually an example of assumptions biting me in the ass. I’m so used to seeing resistance in that spot on the statblock that it didn’t register that it actually said immunity.  So I like the resistance rules very much, but golems are NOT an example of it. They are, in fact, terrifying and will totally jam up a party without magic.

Grell – Floating brains with beaks and paralyzing tentacles. They’re ambushers, and thankfully they back they up with an actual stealth score and enough intelligence to make them tactical fighters.

Grick – These guys are nasty. They’re CR 2, but they have damage resistance to non-magic weapons as well as stealth and multiattack. There’s one in Phandelver, and that made me pretty nervous. The grick alpha is nastier (CR 7) but at that point its resistances are a bit less potent (because the party is likely armed to deal with it).

Griffon – Really, the most interesting thing about the Griffon’s entry is how invested they are in eating horses. Nothing wrong with it. Just kind of there.

Grimlock – Possibly an even less necessary humanoid than the gnoll, their main gimmick is their ability to operate in complete darkness. They’re made a bit more interesting by their lore (former cannibal cultists, worshiping Illithids) but the net result is basically to give Mind Flayer’s creepy minions. Which is not necessarily a bad thing.

Whew. That was a lot more Gs than I expected.