We started the Saturday game this weekend. Mappers takes place every other Friday, and this game is slotted to take place on alternating Saturdays, but other than the fact that it would be a game, I had pretty much nothing planned going into it. I had considered Monster of the Week, but Fred has started something up on that so I tabled it. If I liked the new Star Wars a little more than I do, I probably would have pushed for it. But, ultimately, the answer ended up being Dungeon World for two big reasons. First, I knew we could get chargen done quickly and get into play. Second, because schedules are weird, it would be nice if people could easily transition between the two games, based on availability.[1] 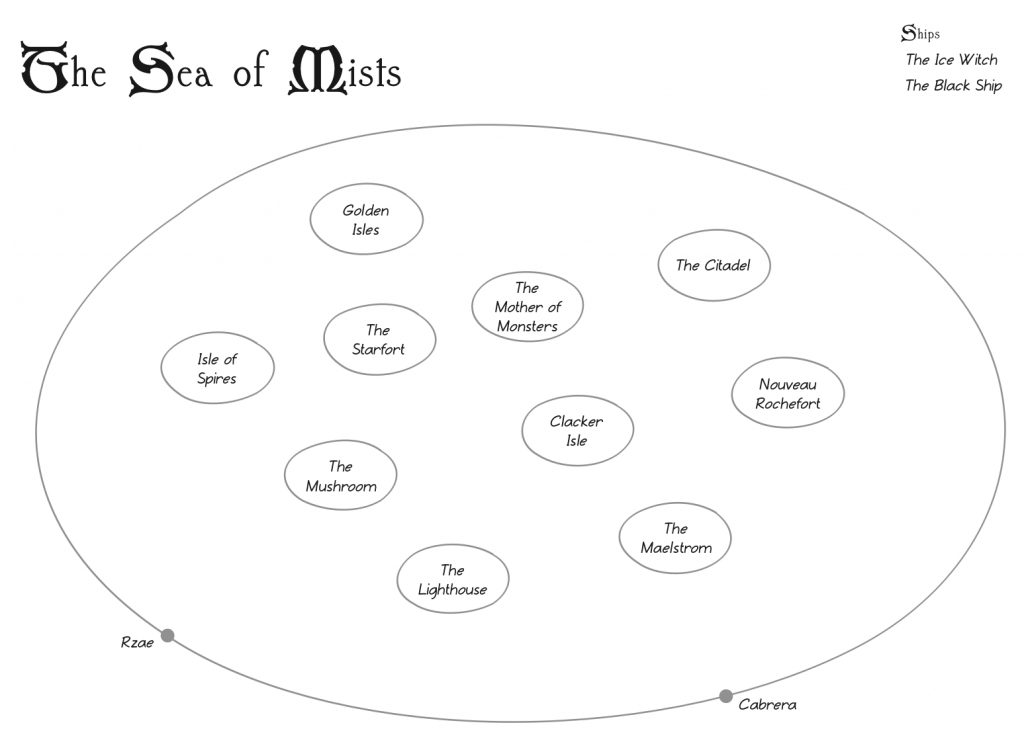 So the new games is “Navigators”, and I’m describing it as occurring Adjacent to the Mappers game. Navigators takes place on the Sea of Mists, the body of water that Rzae is on, and treats Rzae as its home port. This allows characters to move between games without too much hassle, but still allows them to be different games.

Doing a second chargen on the heels of the first was interestingly educational. When we did Mappers, I had a very slim pitch – maybe 4 or 5 sentences. For Navigators, I had even less and – curiously – I think they setting suffered a little bit for it. The lack of a solid elevator pitch meant that we had to spend some bandwidth on getting it too that point, and then more to move beyond it. It feels like a tipping point, in the mechanical sense, and doing the work to get there in advance seems like the right call for next time. [2]

Anyway, the setting we settled on, the Sea of Mists, is the mysterious see that Rzae is on. There are other trading cities around the sea, and there are sea routes to them, but the bulk of the sea is unmapped and possibly unmappable, as the layout changes (and there is probably weirdness related to Rzae/Umulon). Into this sea we threw:

Some of these have a line or two of detail about them (and they’re in the updated campaign sheet) because the names did not quite tell tales the way the city ones did. That is, I’m pretty sure, my fault for helping.

Play also went a bit differently than normal. Things started in media res) “Why are you broadside to this ship and boarding? Why isn’t this going as smoothly as planned? How did it just get worse?”) with the Ice Witch’s crew boarding a slaver ship that had Fafnir in the hold just as zombies came up from belowdeck.

The actual chain of events is all easy to recount. A giant undead parrot up among the sails, a dark warlock pounding on drums to animate the corpses and throw around black flame at the heroes. The whole thing (maybe 100 minutes) ended up being the fight scene, from start to climax, far and away the longest fight I’ve run in Dungeon World yet. it was full of fun moments, people being blown into other areas of the ship, the paladin standing like a beacon against the Warlock’s flame, the Bard and Dashing Hero teaming up on the Warlock and, of course, the Giant laying about with the chains they’s used to bind him. But plot wise? Pretty short.

Just as Jack & Shrike’s Excellent Adventure showcased one type of die luck for me, this one did another, specifically, damage rolls. The Paladin spent most of the adventure getting dogpiled by zombies as he fought his way forward, but they never rolled more than 2 points of damage, with the net result being that he came out of the whole thing pretty much unharmed. Even the giant undead parrot failed to pierce his armor as they rolled across the deck in a death grip.

And while it wasn’t quite as bad, the characters rolled pretty poorly for damage whenever they managed to hit the enemy Warlock, which kept him on his feet a lot longer than I expected. In fact, they only ended up defeating him by knocking him into the water[4] which worked out fine, because he just got a big “Recurring” next to his (as yet undetermined) name.

So, fun session, good start, and the as-yet-undetermined loot grabbed from the slaver captain’s quarters is a good hook for the next session, but also definitely suffered from some first-session roughness.

At a higher level, it’s also raising an interesting question with the campaign as we’re now up to 8 characters, and there are certainly going to be more as it continues. At present, we allow all the core classes plus Barbarian, Warlock and Dashing Hero (Artificer would be a bit setting-busting, so it’s off the table). Only Warlock[5], Cleric and Druid remain unselected, and the simple reality is that with the next set of players, we’re going to get some duplicates. I am really curious how that works out. And I may take it as incentive for a bit of playbook building myself.

Anyway, the game has been successfully launched. I’ll probably pick up what Pirate related material is available for -World, then decide I hate most of it and write my own. But perhaps I will be pleasantly surprised (which is, I note, a plea for recommendations, if such things exist)