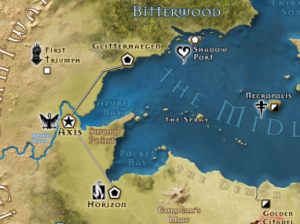 Ok, the setting chapter. I probably read this one more thoroughly than any other one, simply for my own entertainment, which has lead me to conclude that it’s ok.

Not really knocking you over with praise here, so let me back up a minute.

There are lots of ways to write a setting, but there are three big ones[1] that I would call out as the most common.

The first is the comprehensive setting, usually written in an atlas and encyclopedia style, as if the place in question was real, and the purpose of the game was to document it thoroughly. This is the classic setting book (or, with less detail, gazetteer) and it’s a very hit or miss proposition. If well written, it can be a fun read, but the structure itself offers no real help when it comes to play. It’s frustrating to use unless you enjoy the setting mastery element of play, where it all comes together once you’ve stuffed it into your head.

The second is the dynamic setting, which is sparser on details, but what details there are are strongly connected to the other details in the setting, so there is a focus on a coherent whole. A lot of these are faction or personality driven settings, where the interactions of those groups drive play[2] and at first blush this would seem like a natural fit for 13th Age, but it’s not. It depends too strongly on defining elements (like motives and desires) which 13th Age explicitly leaves open ended.

The last is the fun bucket, which is probably the most game-focused of the three. It forgoes details and dynamics in favor of easily accessible content. In effect, it offers setting as a loose container of playable material on the basis that any backend disconnects can either be ignored, handwaved or backfilled.

13th Age falls firmly into the third category, and I must admit that it is not a category that is entirely to my taste, so there is absolutely some bias there. But there’s a bit more going on.

So, first and foremost, I want to call out that the the setting chapter is a fun read. Lots of interesting, gameable elements. It’s all very loosely sketched (and in the case of Starport, not even that) and any given element can easily be seized upon to do kind of interesting things. That’s fun, but doing that requires walking a pretty fine line between accessibility and detail, and 13th age definitely runs thin on the detail. Yes, the theory is that this is all stuff for you to fill in for your own campaign, but a GM can also do that from scratch – the setting needs to bring enough to the table to be a useful part of the conversation. In some places (especially places with clear and obvious overlap with the icons) it does the job. In other places there is not much more than a name and perhaps a gimmick.

So it works in bits and pieces, but it’s hard to take as a whole, for several reasons.

One issues if that this is a weird world. In some ways really, really weird. The Sea has opinions. Dungeons are actually giant living creatures swimming up from the depths. Clouds are solid. Kaiju emerge from the ocean with such regularity that hundreds of miles of walls have been erected to stop them. Portals to hell dot the landscape, including one the size of the grand canyon, not to far from the petrified face of a demon lord pushing his way out of the ground who is large enough that you can see his features on the map.

It’s all presented in a very generic fantasy tone, but this is actually a pretty freaking gonzo setting. And the reasoning is clear – the setting is largely designed as a dungeon delivery mechanism. Most of the weirder decisions are in support of one classic D&D trope or another – weird dungeons, floating dungeons, abstract dungeons, hellscape dungeons – it’s all in there. And if what you really want is a setting where you get to have lots of dungeon crawls without feeling like they’re out of place, this totally delivers. But if not, it’s going to be a bit weird.

The setting also stumbles a bit in communicating scale. At times, the setting feels very large, and at others it seems fairly insular[3], which has a weird effect regarding the nature and role of the icons. As written, the actual setting chapter ends up making the icons feel like the more traditional elminster-style NPCs that would be kind of off-putting. Similarly, the setting also seems very static. Events of a few centuries ago are still “new”, and it seems that things are basically as they have always been.

Now, are these problems? It depends on what you want out of the setting. All these concerns about scale and tone can be dismissed by simply pointing out that the purpose of the setting is to drive play towards the next adventure, and the rest is just details. But if the setting is something you want to give those adventures context outside of themselves, then it’s a bit more complicated.

It should be obvious by now that I’m in the latter camp. I found it a fun setting to read, but the seams were simply far too visible for it really grab me, and the necessity of leaving the Icons undetailed ended up making them seem almost cartoonishly simple. Worse, because that’s true across the board, I feel like trying to fix it for my own campaign would create a vast cascade of “well, now THIS doesn’t make any sense” and that leaves me more inclined to just start from scratch.

But that’s me, and hopefully I’ve elaborated why well enough that you can look and say “well, that stuff doesn’t bother me” and know what will work for you.