The question of organization came up in yesterday’s rpgchat and I brought up one particular gimmick which I figured I’d flesh out a bit. What it comes to is this: if I can only have a single tool as a GM, it’ll be a stack of index cards (supplemented with a double ended sharpie which is fantastically all purpose).

There are a lot of reasons for this – the card is a a fantastically all purpose tool – and I’m going to talk through a few of them.

First, I’m pretty terrible about keeping any kind of organized records as I play. I’ll write up ideas in notebooks or in software, but I’m very haphazard about it, and while it’s useful creatively, it’s not too useful from an organizational perspective. Index cards end up filling that gap.

My method’s pretty simple: 1 card, 1 idea. Write the name of the person, place or thing on top of the card, and any notes in the body of it. If I’m feeling super clever, I may add some icon language to reflect connections, but really that’s more work than it’s worth most of the time. 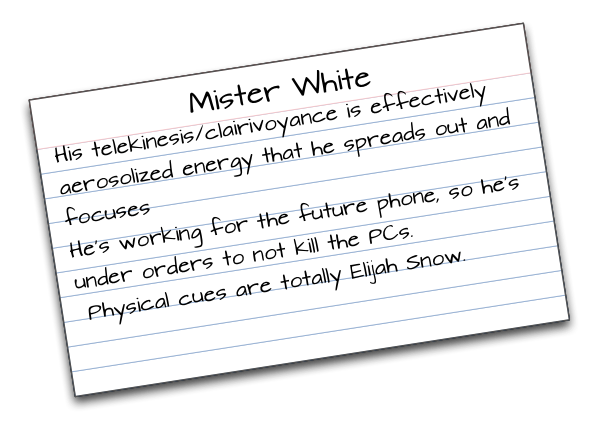 Now, despite the simplicity of this, it has a number of very concrete benefits.

First, by forcing myself to keep to a single card, I force myself to keep the ideas brief enough to be easily expressed, which means I’m not expecting the players to track a lot of information.

Second, by keeping the ideas to a single card, I can take advantage of the physical properties of the cards in a number of ways. This means that:

Third, If I’m doing a game where elements of play go on the table (like Leverage or some styles of Fate) then I can use the blank cards to track such things, then gather them up at the end of the session as a record of what transpired).

Lastly, this ends up being pretty easy to store and transport. An index card box costs maybe two bucks, and if I ever get really pressed for space, I’ll spend five bucks on a fancy box, and be just fine. And it’s easy to make it part of my whole gaming kit.

Now, there are a few specific habits that help make this doable. Most importantly, my preference in games leans towards those where the mechanical information I need for an NPC can fit very easily on an index card. In a pinch, I can put notes on one side and mechanics on the back, but in practice I don’t really need to do that very often.

Ultimately, there are more sophisticated ways to do this. All of this information could be kept in a wiki or evernote or three ring binder[1] and if that works for you, then that’s great, but for me there’s a part of this which is basically just enough system to address my laziness. It would be cool if I was disciplined enough to do something like that, but the reality is that throwing a bunch of cards into a box is just about all I have energy for at the end of a session.

3 thoughts on “My Favorite GM Tools”