I watched John Dies at the End last week, and enjoyed it. Nothing earth shattering, but more than enough good ideas and dark humor to be very much worthwhile, with one or two bits that I’ll keep in my back pocket for future games. Might even read the book sometime.

Without delving into spoilers, I feel ok mentioning that the movie is a bit apocalyptic in tone, in the classic Biblical kind of sense. Bad things, end times and so on. Very little of this is explained in any detail (which is great) but it’s clear there are multiple forces at work here. And this got me thinking.

See, when you have these staving-off-the-apocalypse sort of stories, and you open the door to things of a certain scale (by which I basically mean angels and the like) then there’s a certain amount of weirdness to it if you carry the logic to it’s extreme. If these are really beings as old as the universe with power to match, then a couple of smartasses in a cool car don’t really have much to bring to the party.

Stories find ways to cheat like mad to support the idea that the protagonists really matter, often as an illustration of something awesome about humanity, but it can get stretched pretty thin, specifically when you start thinking on a genuinely universal – perhaps even multiversal – scale.[1]

When it’s done well, it usually revolves around interesting portrayals of the angels (or similar agents) which seem true to their power, but also put them at a disconnect from what’s going on. It struck me that this is an angelic version of the project management triangle. 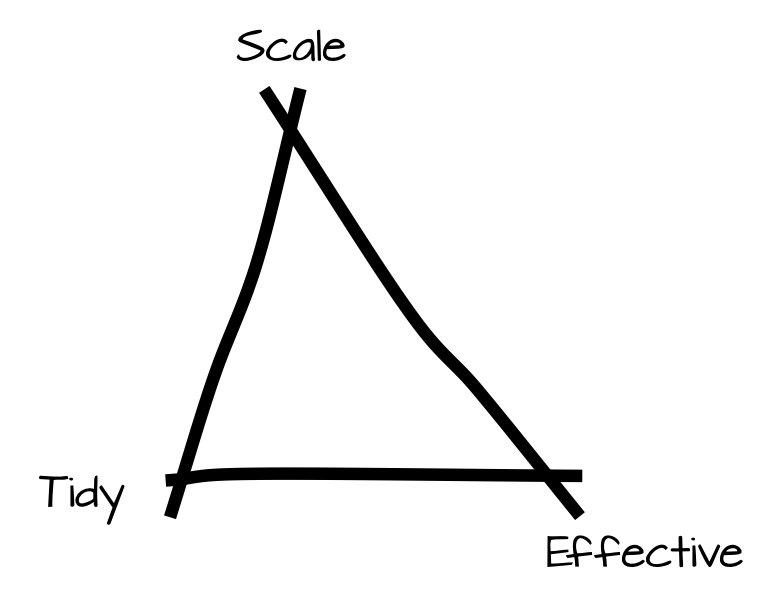 That is, when an angel acts, they can only accomplish two of the following:

So, you want angels to solve the vampire problem in New York City? They can TOTALLY DO THAT! Options include:

After you go a few rounds of this, as an angel, you might start getting a bit gun shy about wading in. You can see a sort of bureaucratic hesitance emerging from a history of these sorts of outcomes. and with that, I can see some good excuses for using angels.