Over the Edge was probably one of the most important games in my personal gaming history.  It was the first really light game I came across that was actually powerful enough to handle a real range of gameplay.  Pervious exposure to things like TWERPS were more jokes or one-trick ponies, but OtE offered a game that could do everything I needed with a character sheet that fit neatly on an index card. Before I encountered it, I would not have thought such a thing possible.

I’ve talked about it before, so I won’t go too far into it, except to say it’s a fantastic game, and a great gateway from the world of D&D into lighter rules without any story-gamey kind of taint.

Now, this became recently relevant when Atlas Games did something awesome, and released the rules for OtE under the OGL as the WaRP system.   They’ve got a perfectly serviceable PDF available, along with the WaRP logo, but I admit, I was a little frustrated when I dug it up and tried to read it.  It was pretty much pure infodump, and while that’s useful as a reference, it’s less useful to point people excitedly at and demand they go read it. 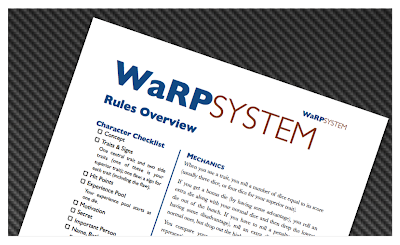 So, predictably, I took the PDF, extracted the text, cleaned it up, and reformatted it all.  Now, I’m not the Evil Hat layout guy, so this is nothing more than nice and functional, but I think it’s a pretty workable copy for sharing.  I’ve posted the pdf here and I’m considering it a draft for the time being.  You spot anything wrong with it, feel free to let me know, and I’ll patch it up.

Now, I hope you all benefit from this, but I’ll concede, this is mostly a selfish act.  Not only do I benefit fromt he world learning more about the system, putting it out in this fashion makes it all the easier for me to start writing a few hacks that are based on the system.  The OtE engine (which I should start thinking of as the WaRP system) has influenced a lot of my designs, so it will be fun to start mucking with it directly.

(Plus, since it’s OGL?  FATE cross-compatibility is no problem at all)

Anyway, feel free to take a look and let me know what you think.

EDIT – Because I’m crazy, I re-generated the doc at 5.5×8.5 for easier tablet reading or for booklet printing. Tablet sized version is here.

FURTHER EDIT: Dropbox lost my links, so I had to regenerate them:

Hopefully final edit: Dropbox changed how they handle their public links, so I moves a copy to google, which can be found here: https://drive.google.com/file/d/0B46S–DQt9gXNy1yOGFWR2x5SUU/view?usp=sharing