Ok, so you’ve got a nice shiny die representing your class. That’s all you need, right?

Well, sure, we could leave it there, but that would be kind of dull.  Instead we’re going to jazz it up with a little bit of crunch that really shines a light on what a class does.

At the highest level, class abilities provide a list of special exceptions of improvements on the normal rules that the class is capable of.  A lot of these hinge on opportunities (when the GM rolls a 1) or on spending a plot point.  As noted earlier, the normal limts on spending PPs are fairly restrictive, but classes represent the various exceptions to this.

While there will always be exceptions, most classes will have the following:

As an example, let’s start with the Squire. The formal write up of the squire abilities looks something like this:

Written down on a card, it looks something like this: 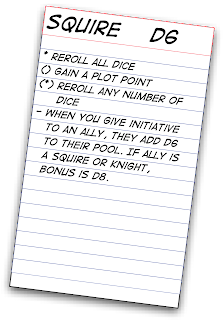 The little notations before the abilities have mechanical meanings.  I actually have drawn little iconic versions of them, but that’s not really my strength, so I swapped back to something supported by ascii.  In this case they mean the following:

(*) : Take an opportunity to spend a plot point to… (whether you won or lost)

(EDIT: Kudos to the keen eyed commenter who spotted my omission of (*), which is now corrected)

The squire is not a very sophisticated class – it’s abilities are pretty much reroll driven, with the idea representing the young hero who survives through pluck and good luck more than power and talent, with a little bit of teamwork thrown into the mix.

The Chemist is a little bit more fiddly, but he also has a very clear schtick – he’s a healing class focused on the creation and use of potions. Again, the formal writeup: 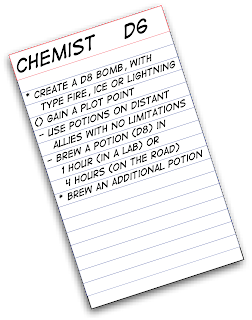 And a few more examples: 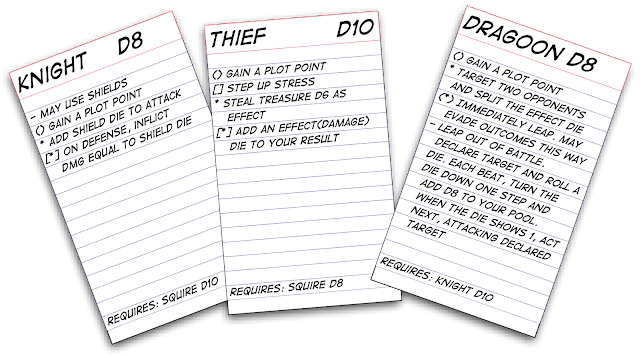 Ok, enough of that.  Next we’ll get onto the magic users and other weirdos.

1 – Most classes have the ability to gain a PP as a result of an opportunity. This is common enough to effectively be a default, but it’s a class ability because it allows the design of more powerful classes which do not have that feature (and as such, must hit their distinctions hard to get PP).


2 – At this point I realize I may be getting ahead of myself on the rules here, since this requires some fair grasp of concepts from Leverage and/or Marvel Heroic.  If it’s not clear, “Take an opportunity” means “Take an action in response to the GM rolling a 1”.  it’s entirely possible to take several opportunities on one roll.


3 – To give someone else a potion, you need to be near them (though that’s mostly descriptive). Mechanically, you need to attempt to hand them initiative or take a penalty to your action. The Chemist ignores these problems.


4 – The Hunter is, I think, going to be able to contribute viscera to this process for bonuses.  But I haven’t quite worked that out yet.