Not every Cortex game uses opposed rolls, instead relying on difficulties for handling some simple situations. Leverage does not, but that is in large part because Leverage’s mechanics depend on some very specific interplay among the dice. It’s easy to see why some games would do this: it’s certainly less work to call for a roll and just see what it hits difficulty wise. It allows for a little bit more predictability: the GMs 2d4 has that oddball chance of coming up 8, while a simple difficulty does not. That means the GM has to deal with fewer situations where the dice take things in a direction other than what’s expected.

Those are all good reasons to go with difficulties, but turn them a few degrees and I find them a persuasive argument for using opposed rolls all the time. Why? Because the opposed roll forces the GM to think about the roll, enough to ask herself “Is this really worth rolling for? Am I really ready for this to be interesting, however it turns out?”. That little bit of extra thought can make all the difference between keeping a game cracking along and getting hung up on some stupid roll going wrong. Obviously, rolls will go wrong with opposed rolls too, but the GM should be more prepared for that outcome.

That said, setting difficulties in Cortex is not always intuitive. If the GM has a whole lot of attributes out on the table, then she can usually build a roll out of them, but that’s not a reliable resource. Sometimes the material’s just not there, sometimes your players go off in another direction entirely, and none of the material you have on hand are of any use.

In the absence of that, I suggest some guidelines for creating difficulty based on two words that you can assume almost everything has: “Normal d6” and “Thing d6.” That is to say, if you need to roll for the security guard in a complete absence of other information, then he’s a Normal Thing (or Guy, in this case), so 2d6. Easy peasy. Structurally, this is an extension of the basic rule that you fill in empty slots with d6s, but conceptually the difference is all about making sure there is language to these things.[1]

Assuming one-off rolls, this is not always going to make sense. Sometimes roll should be pretty trivial, but you’re willing to call it to fish for complications. Sometimes a roll will simply be harder solely because the player is making it harder (such as, for example, trying to con someone in a language he speaks badly rather than his native tongue). For those situations, I suggest that a cinematic model of difficulty can be applied.

A cinematic model of difficulty hinges on two axes: is the task important, and is it interesting? These are possibly counterintuitive to someone who is used to thinking purely in terms of whether the task is difficulty or not, and if this is too weird for you to think about, consider that interesting and difficulty usually go hand in hand, and I’ll treat them as a pair in my examples.

Important, however, is the rub. If we were shooting the movie of this game, how important is this task? Is it a trivial distraction, like distracting a barrista to get a free scone? Or is it something critical and high stakes, like disarming the bomb before the timer reaches zero? Important tasks are, by their nature, high tension and high risk, and the size of the importance die reflects that. Identical tasks can have different importance depending on the context – picking a lock may be only moderately important in a bus terminal, but it’s much more important when the water is rising and the sharks have just been released.

Interesting also ties into the movie of the game: how cool would this scene be to see? How exciting is it? How awesome will it look if the character pulls it off? Hard things tend to be more interesting, at least so long as they’re visible to the viewer: one math problem is probably about as interesting to the viewers as another, which is to say, not terribly.

The net result of embracing these two axes is that the cooler the roll is, the harder it will be. Think about that for a moment – the greatest reward will be the most difficult to achieve. There is a specific, rewarding symmetry to that, and let me call out right now that it is not to everyone’s tastes, but it’s surprisingly adaptable. For example, many players take great satisfaction in reducing difficulties through careful planning, seeking to maximize their chances of success. At first blush, such players might seem at odds with this approach, but consider that these machinations may be seen as turning down the Interesting Dial (as things are now a little less seat-of-the-pants). That player is rewarded with what he wants – less risk, greater certainty.

Which leads to the abuse. Players can, theoretically, game the system by doing boring, unimportant things, and I say, more power to them. Sometimes that’s what people want, and if success doesn’t change their behavior, then it’s good to be able to support it.

Anyway, this is hardly applicable to every game, but on the off chance it tickles your fancy, I use the table below. 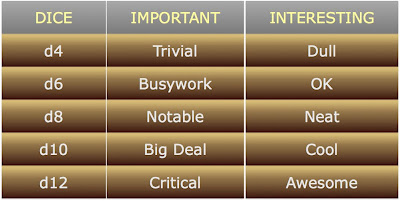 (And as a bonus guideline, if you find yourself sitting there with 2d4 in your hand, it may be a cue to ask yourself: Does this even need to be rolled?)

EDIT: Quick clarification for those unfamiliar with Cortex: it is effectively an Xk2 system, which is to say, you roll some number of dice (minimum two) and keep the two highest. In this case, it’s assumed those two dice are I&I. In the specific implementation used for Leverage, 1’s create problems, so d4s are effectively penalties on a roll: They do not help the total much, and they increase the odds of rolling a 1. Thus, something that’s Awesome and Trivial would be d12 + d4, and while that averages decently (at 9, same as 2d8) the odds of a 1 coming up are greater, and creating a problem for the GM. That is to say, GMs looking to not suck out, are well served to make things more interesting and important.

1 – Speaking strictly for Leverage, you should really only do this for truly one-off rolls. If something’s going to call for multiple rolls, the Fixer should add a real attribute for them. That said, for other games, you might want to assume the GM has an infinite supply of Normal Things, and only require spending to bump any of those up, or add additional values.

9 thoughts on “Cinematic Difficulty in Cortex”