Edit: Seems I screwed up my scheduling, so there’s a double post today – this one and the one below. Enjoy the fruits of my inability to read dates!

Dresden Files’ city generation is one of my favorite parts of the game, but it can occasionally create problems for groups that are trying it for the first time, especially if they’re using the Vancouver method of sing a generic city as a backdrop. The problem tends to be the points of inspiration – the usual model is to outline places, the come up with the faces associated with them, but that can be rough when you have no starting point.

So this came up in discussion the other night with Chad “Robot from the future powered by beer” Underkoffler, and his solution is probably the most straightforward – if you don’t have places, then start with the people and then figure out where they are. That works pretty well, but I know that some people like a little more inspiration, so I got thinking about how to do that for a city.

The trick is that you’d basically be generating “A [QUALIFIER] [PLACE] with [SITUATION]” and that’s easy enough to turn into a set of tables, so I sat down and started doing so. Simple enough, at lest for qualifier and place, but situation is a bit trickier. Yes, sure, it’s totally possible to come up with a random list of situations, but I think that would ultimately be counterproductive. Generic situations are all well and good, but the point of doing collective city creation is to come up with things that are relevant to the players. Now, I am sure your players are creative, and they would tie themselves into the events that rolled up with no problem, but that feels enough like cheating that I’m leaving that out. Instead, here’s a simple table of qualifiers and places. My suggestion is that before you roll on one of these, pick an aspect, and let that be the inspiration for the situation in the place. 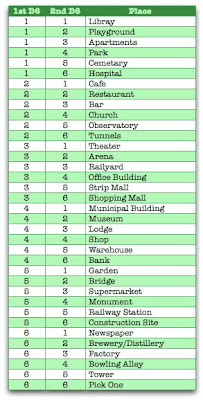 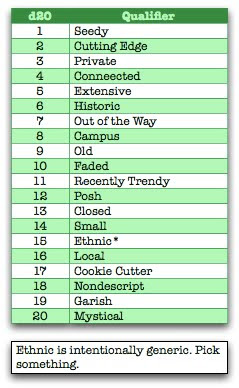 3 thoughts on “Faces and Places”