I have probably been unduly influenced by reading too many screenwriting books, but I have a bit of a habit before I start a new game. I like to write up a pitch for it[1]. It’s short, usually only 500-1000 words, with the idea that it can just go into an email. The idea is to sum up the tone and premise of the game and give the players enough to start chewing on character concepts, but there’s a bit more to it. The act of writing it down in this fashion also helps me focus on the idea and see if I’m actually excited about it. There have been plenty of times when I’ve had an interesting seed, but in the act of writing it down I discover that I don’t have anywhere I want to take it, and I’d much rather find that out before I start the game.

This comes up because I’ve been wanting to run a gritty fantasy game. I’ve been influenced in this thought by Richard Morgan’s The Steel Remains, but also by a kind of nostalgia. My old Rolemaster games were pretty much pure urban grit, and I’ve been itching to get back to that. The other night I was finally struck by a solid premise that got around some of my concerns of the genre (specifically, I like giving characters a shared backstory, but that’s usually much nicer than fantasy noir demands) but created an open enough framework for some straight-up sword and dagger goodness.[2]

The pitch is as follows:

When the hordes came out of the east, the Empire was unprepared. It had gone unchallenged for too long, and while its armies were vast, they were poorly led. What would have once been little more than a border skirmish turned into a full-fledged invasion that threatened the imperial capitol itself. The empire proved robust, and the shock powered its counter-attack, leading to a year-long stalemate on the eastern front. The warlord of of the horde sought to break the impasse with a daring move, leaving a fraction of his forces as a distraction in the east and leading the rest on a march across the deadlands.

There’s no reason for the empire to have expected that. The lands of the north are called the deadlands for a reason – the things that wander it are old, and little is known of them except that they kill. The idea of leading an army across it was inspired madness – even if they succeeded in reaching the pass, the citadels that guarded it would hold them long enough for the things in the north to descend upon the invader. But if they could succeed, and strike through Tramontana pass, they would have a clear run at the exposed belly of the Empire.

The northernmost citadel was the Dragon’s Head, also called the Shield of the North. It was manned with five thousand of the empires finest troops, veterans of numerous deadland incursions. Hard, hard men. The khan pulled the walls down around their ears within a week and pressed down the pass to the second fortress.

Waiting at the southern end of the pass was the Dragon’s Tail, also known as the Ass of the North. It was populated by every soldier who had pissed someone off enough for the worst assignment in the Empire, as well as a handful of mercenaries, explorers and traders. When the horde arrived, the commander filled the southern gate with fire powder and withdrew with his bodyguard, making it clear that retreat was not an option. All in all, there were almost seven thousand people within the walls of the Dragon’s Tail when the horde came. In a week, there were half that number. In another week, perhaps a thousand remained. By the end of the third week, when the things from the north fell upon the horde’s rear flank and reinforcements were still a week out, a few hundred defenders remained. The things had reached the gate when the forces of the empire finally arrived to hold the fort, and there they found only a hundred defenders, tattered and bloody. 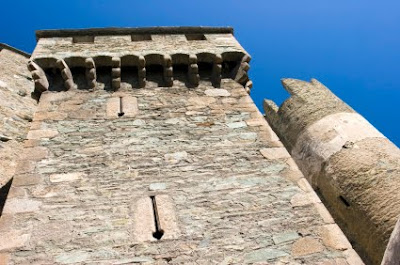 A proud and victorious (if somewhat by default) empire paraded these heroes back to the imperial capitol. There were 91 of them in all, but with the commander, his bodyguard, and the general of the reinforcing army it made a perfect 100, a number the sages and bards seized upon and called for celebration of the Golden Century, the hundred who had saved the empire. A hundred golden medals were hammered out, granted to these heroes along with other recognitions – including an audience with the emperor himself. They were the heroes of the empire, feasted and celebrated in every corner of the land.

Seven years have past since the Dragon’s Siege and the members of the Golden Century have found that heroism tarnishes faster than gold. Some leveraged their fame into position, at court or away. Others used the opportunity to pursue other goals, dreams of education or exploration. Still others have faded away, disappearing down the back alleys and wine shops of the empire. They are all history now, an unwelcome reminder of a time best forgotten.

Still, they know their own. Karl Mitterand was one of them, and his death has drawn out his compatriots for his funeral. Karl had been a soldier, and a drunk, and since the Dragon’s Siege, he’d steadily become more one than the other. The ceremony is in two days, and apparently Karl sold his medal for drinking money. It’s embarrassing, but there’s no way in hell he’s going into the ground without it.

Now, I have some more ideas about the setting in my head. For example, I think the empire has a wild range of cultures within its boundaries, and I’m pretty sure the Heroes of Dragon pass were awarded lands, but they mostly got cheated out of them since they’re under the oversight of either the reinforcing general or the citadel’s commander (if he’s a dick – he might not be) and thanks to some bureaucratic wrangling, he basically owns them. He’s done pretty well by this whole hero gig, a point to hold in contrast to the actual heroes.

I could go on, almost indefinitely, but I am intentionally reigning that in[3]. I’ll answer any questions players have, but this is a loose sketch that has just enough framework for the characters to fit in, and to allow the players to bring in details that appeal to them. That said, you’ll notice the pitch makes it clear where the action will start – looking for Karl’s medal. I’m all for open-endedness, but it’s essential to have some direction to start with.

By accident, this also suggests a fairly practical model for scheduling purposes. I have a core of folks I intend to offer seats at the table, but there are many more people out there than there are chairs. The Golden Century is a great model for allowing guest characters, even recurring ones, by filling in some of the remaining numbers. Serendipity.

Anyway, with that out of the way, I need to see about scheduling and picking a system, both of which will require some work, but I’m good with that.

1 – I also tend to name the campaigns. This one is looking like “Golden Century”
2 – Curiously, I still haven’t picked a system for this yet. Rolemaster would be perfect, but for the bookkeeping element. Burning Wheel has some merit, but the minigame is too transparent for what I’m looking for. So I’ll chew on that for a bit.
3 – This is crazy hard for me, since I know what questions I want answered, and how I’d answer them, but I must be patient.