Weapons of the Gods has a wonderful system for kung fu, and has some of the best mechanics I’ve ever seen for integrating the rules with the setting. However, it also has a bit of a reputation as being opaque, one that is not entirely undeserved. The primary points of confusion emerge from the subsystem which is used for non-kung fu activities (things like medicine, magic and such).

The basic idea is that powers put statuses on your stats (or on concepts that correspond with your stats) – these status might be good or bad, and the color on them is all about the kung fu flavors – having your chi out of balance and such – but the mechanic tends to be a bonus or a penalty to the stat. The basic idea is that once you create such a status, it can be increased, decreased, inverted, or moved to another stat. The logic of how these things are done are where thing get a little convoluted.
Anyway, this is where I end up thinking about simplifying the whole system, but keeping the idea intact, by using the fixed status list. The idea came to me as I am thinking about healing in the MUSH context, turning a “Hurt” status into a “Tired” status, or even into an “Angry” status to do berserker rage.
As with all such models, a lot of this hinges on coming up with a robust list of statuses (a task of its own) but the idea of how the statuses interact and can transform is a fruitful area to play around in mechanically. But to illustrate, let’s assume a 4 stat system of Earth, Air, Fire and Water, in a vaguely Everway sort of arrangement. Each might have a positive and negative status: Earth might be Resolute/Inert, Fire might be Energized/Tired, Air might be Sharp/Dull, and Water might be Flexible/Spineless. (Pick other statuses if you like. This is purely for illustration.

So, something bad happens and you end up “Tired” (Negative Fire). You go to the Shaman, and what he does depends on his skill. He might be able to do one or more of the following:[1]

Let’s say this Shaman is a skilled Water practitioner, so he can turn water statuses from negative to positive and back, but he can only move things “around the wheel”. He would need to move Earth/Tired to Air/Dull to Water/Spineless and then invert it to Water/Flexible. That’s 3 steps and assuming each step has a cost or skill roll associated with it, that’s much more complicated than, say, going to the fire Shaman who could just flip “Tired” to “Energized” in a single action.

Obviously this is a fairly crude example, but consider if it had a somewhat more flavorful or setting-specific set of statuses, maybe things that actually represent curses and blessings – say a saint and a devil for each position of the cross, or as Weapons of the Gods does, the humors of the body and the good and bad parts of each. This wheel model is one of the neater semi-hidden features of WOTG, and explicit statuses seem to be a way to make it easier to introduce into another game.

Alternately, this need have nothing to do with stats or character sheets. With a little bit of tweaking, this is a decent model for any closed-but-flexible dynamic, such as a political system. Imagine if you replaced the elements with, say, the factions at court (King, Queen, Church and Council, for example). The statuses become “In Favor/Out of Favor” and you suddenly have a map of the dynamics of the court, and your place within it. Even if there are no explicit mechanics for the change, this is something that the GM can use to keep track of the results of events in play. 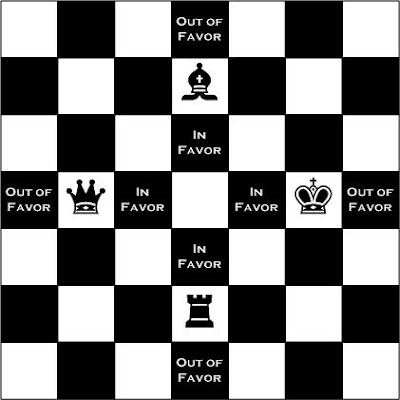 1 – There are also a lot of even more fiddly options, like “Invert, but only by changing it to the opposite element”, to say nothing of creating and removing statuses. And, of course, it’s entirely possible a character might have more than one status if the setting logic allows for it.