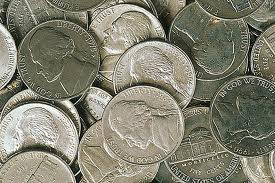 One of the best, most intuitive RPG systems I ever played largely revolved around us throwing nickels on the the floor.

This was back at an AmberCon Northwest many, many years ago. Ameer Tavakoli was running a game about the guardsmen of Amber. I was playing the stoic, brutish head-knocker and Fred was playing the well-connected manipulator. I could not tell you a lot about the bulk of the game (though I remember my character pretty well) but the endgame really stuck with me. Over the course of the game, as we’d done things to accrue resources and influence, we had earned nickels, and when endgame came (and the city exploded in violence), we switched to a different mode of play.

The GM also grabbed a handful of nickels and started tossing them down, declaring something that was going wrong with each nickel thrown. We, in turn, could throw our own nickels to declare counters and responses. As suited my character, I stepped in to take the brunt to things, and I burned through my entire reserve of nickels against the initial result. Fred then stepped in in a very Fred-like fashion, bled he GM dry with his own GM spend, then when he had things completely under control, closed with “And, remember – I have a lot of friends in this town” and dumped his double-handful of remaining nickels.

I’m sure it does not sound as cool in the retelling as it was in the moment (the curse of a fun game) but it’s a memory I value, partly for the fun, but partly for its educational value.

See, while the actual experience of the game was very fluid and engaging, but if I had articulated it purely as mechanics, it would have run the risk of being stilted and boring. After all, it’s just a spend-counterspend system, with the ultimate success or failure being determined by which side has the most nickels. That doesn’t seem much fun. And, in fact, if we had approached it mechanics-first, then it probably would have been a number-crunching slog.

Instead, we were approaching it from a game-first perspective, with this currency serving as an interesting sidebar on what was going on. Through a combination of strong GMing (Ameer is amazing), player buy-in and a hard-to-track-but-easy-to-judge information set, we were enthusiastically willing to approximate things rather than sit down and crunch the numbers. That is, our behavior in the moment was much more engaged than it might be at a distance.

This is important to me because it’s a reminder that a lot of things that might seem like problems on paper depend a lot on how they’re pursued in play. This is most strongly on my mind in regards to the new 7th Sea raise system because it is, on some level, also a nickels system. It has some other mechanics, yes (and they’re important, but secondary for the moment), but really you could just start off each scene with rolling dice to generate nickels for everyone, then have them throw them on the table declaring awesome things.

This is pretty cool, but clearly can be awesome or a drag depending upon buy in.

Now, 7th Sea does have some mechanics to try to fight off the drag, and I’ll drill into them at some point, but they’re no magic bullet. It is entirely possible for the raise system to change from a game to an exercise if the enthusiasm is not present. That is: If you do not want it to work, it won’t. That doesn’t guarantee that it will work if you want it to, but it does call out the first hurdle to overcome.

When I talk about wanting to see 7th Sea in action, this is what I want to see. I want to know if I can get enthusiastic enough to throw nickels with reckless abandon, or if I will find myself forced to count pennies. I want it to be the former, but it is exactly the sort of thing that is revealed only in play.